Bloomsbury Auctions is offering one of the most interesting and varied collections of Somerset Maugham in private hands. The sale encompasses books, pamphlets, periodicals, portraits, artwork and cinema and theatre material related to W. Somerset Maugham and his nephew Robin Maugham. 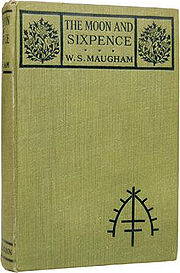 The 346 lot collection which will be sold at Bloomsbury Auctions on 25th November 2010 was put together by Fred Zentner, founder of the popular Cinema Bookshop in Great Russell Street, London which closed in 2005. Zentner’s interest in Somerset Maugham was a natural progression from his passion for film, which began in his tender years when he acquired a copy of Somerset Maugham’s The Moon and Sixpence.
Highlights from the sale include excellent key titles such as Liza of Lambeth, Of Human Bondage, The Painted Veil, Ashenden, Cakes and Ale and The Razor’s Edge; however the collection also offers aficionados some fascinating memorabilia relating to the many film versions of Somerset Maugham’s novels, plays and short stories (lots 160-284).

Few authors have had their books filmed and televised as often, and Zentner’s collection is testament to this as it incorporates a large selection of publicity stills featuring such prominent actors of the time as Joan Crawford, Greta Garbo, Bette Davis, Peter Lorre, Charles Laughton, George Sanders, Tyrone Power, Orson Welles and Bill Murray. Lovers of film will be particularly excited by the film posters, film tie-in book editions and press books, many of which are virtually impossible to find today.

There are several particularly striking lots featuring the author in art and illustration. An imposing and haughty bronze bust of the author by Jacob Epstein comes from Somerset Maugham’s villa in France and is estimated £20,000-30,000 while a much more benign portrait in oil on canvas by Trevor Haddon RA, carries an estimate of £4,000-6,000. The sale also offers numerous photographic studies (with estimates ranging from £30-250) of Maugham throughout his life (lots 304-318), including portraits by Ida Kar and Mark Gerson.

Also from the same newsletter:


A limited first edition of a Harry Potter book, worth almost £6,000, has been stolen from an art gallery, police have said. The rare edition of Harry Potter and the Philosopher's Stone by JK Rowling, was taken from a display box in the Creative Art Gallery in Woodstock (Oxford, England) late last month.

Thames Valley Police have released CCTV images of two people they would like to speak to in connection with the theft.
Posted by Beattie's Book Blog at 2:59 pm