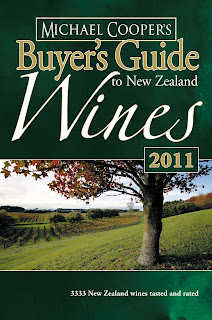 On my bookshelves devoted to wine books I have each issue of this guide going back to the year 2000 and it is interesting to note how much the page numbers have increased over the decade. The 2011 issue published last week at a chunky 672 pages is almost double the size of the 2000 issue.
My copies get pretty knocked about as the current issue spends a year in the car glovebox so that it is always on hand when I am buying wine. I'm an enthusiastic and selective drinker of NZ Chardonnays and with the dazzling array available, there are 88 pages devoted to Chardonnays alone in this latest issue, I'd be lost without this utterly indispensable guide.

The Buyer’s Guide is the only comprehensive, independent, up-to-date critical survey of New Zealand wines. For me it takes the confusion out of wine buying, by describing how each wine tastes, and then rating it for quality and value.

In 2011’s Guide Michael Cooper reports on how individual wine regions have fared over the previous year, and offers an overview of wine varieties from this year’s harvest.
He names his choices for Classic New Zealand Wines, offers guidelines for cellaring, and reveals the highly anticipated, Best Wine Buys of the Year and
the publishers have kindly agreed to let me reproduce Cooper's comments these:

The first thing you need to know about this delicious wine is that its suggested retail price is just under $21. At that price, it offers above-average value. The second thing to know is that the vast majority is sold on ‘promotion’ at around $11.99. At that price, given its excellent quality, it’s an absolute ‘steal’ – and winner of the Best White Wine Buy of the Year Award.

From one vintage to the next, this large-volume label offers impressive quality and great value. The 2010 is mouth filling, fleshly and finely textured, yet also very fresh and zingy, with sweet-fruit delights and rich ripe melon, lime and capsicum flavours, crisp and lingering.

Villa Maria recommends drinking this punchy yet also hugely drinkable Sauvignon Blanc anytime from now until 2012. In terms of garden freshness and sheer aromatic intensity, it’s likely to be at its peak this summer and during 2011. Villa Maria suggests serving it with grilled seasonal vegetables and seafood or chicken, but served gently chilled, it’s also a great aperitif.

How many classy wines can you buy under $15?

This dark, densely flavoured wine won a gold medal at the Royal Easter Show Wine Awards 2010, a four-star rating in Winestate, and five stars from Cuisine (ahead of several high profile, $50 reds.)
Its recommended retail price is $26, but in supermarkets, where it is almost entirely sold ‘on promotion’, the average sale price is under $15. That’s stunning value – worthy of the Best Red Wine Buy of the Year award.

Satisfyingly full-bodied and rich, Church Road Hawke’s Bay Merlot/Cabernet Sauvignon 2008 is already highly enjoyable, but should reward cellaring for several years, gaining in complexity and downright drinkability. The winery suggests serving it as ‘the ultimate match for savoury game and red meat dishes.’ Char-grilled, herbed veal chops are a perfect partner, according to Cuisine.
If you want to buy this great-value red, move quickly because stocks are getting low and the 2009 vintage will be released before Christmas.

About the author:
Michael Cooper is New Zealand’s most acclaimed wine writer, with 34 books and several major literary awards to his credit, including the Montana Medal for the supreme work of non-fiction at the 2003 Montana New Zealand Book Awards for his magnum opus, Wine Atlas of New Zealand. In the 2004 New Year Honours, Michael was appointed an Officer of the New Zealand Order of Merit for services to wine writing.
Posted by Beattie's Book Blog at 6:20 am