Mary Ann In Autumn: A Tales of the City Novel 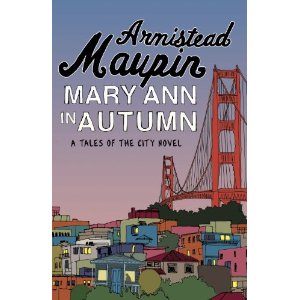 Way back in the 1980s I was addicted to Armistead Maupin’s Tales of the City novels. The soapy goings-on at number 28 Barbery Lane, San Francisco distilled an era: a memorable time when a free-wheeling gay lifestyle was brought up short by HIV.

Maupin’s characters: naïve Mary Ann Singleton, sweet, gay boy Michael Tolliver and their eccentric landlady Anna Madrigal felt like friends. But like the rest of us they’ve grown older and so I opened Mary Ann In Autumn rather reluctantly to meet them again, knowing they’d be grey, creaky and perhaps looking back on life rather than forward.

I didn’t expect to enjoy this eighth book in the series and yet – like tracking down an old boyfriend on Facebook – couldn’t resist finding out what had happened to the characters I remembered.

Maupin picks up the story with Mary Ann’s return to San Francisco. She is 57, facing a messy divorce and major surgery, and so needs the support of her old friend Michael. He is happily married to a far younger, far more handsome man – just like Maupin himself in real-life - and this fictional relationship is obviously, and sometimes uncomfortably, very biographical.

The Tales Of The City stories were always utterly of their moment and so in 2010 Maupin is obliged to weave in the Internet and its impact on his characters’ lives. Settled in Michael’s backyard cottage Mary Ann starts looking up old friends on Facebook with potentially disastrous results. Maupin seems also to have felt the need to tie up most loose ends and visit with most old friends and, as a result, the plot feels frailer than I remember those earlier ones being.

Still Maupin won me over in the end with the friendliness, compassion and the sheer readability of his writing. This is a book about becoming older and wiser that also looks towards the new generation and the issues they face. There are some fantastic comedic moments along the way – in particular a Sound Of Music vignette far too saucy to repeat here. And I was thrilled to discover a new word – horriblize – that I’ve already had occasion to use several times.

If you’ve never read a Tales of the City book this most definitely isn’t the place to start. But for fans of the series Mary Ann In Autumn feels like a good place to say a last goodbye. I liked it Armistead….but please don’t write anymore…

Nicky Pellegrino, a succcesful Auckland-based author of popular fiction, (The Italian Wedding was published in May 2009 while her latest, Recipe for Life was published by Orion in April, 2010), is also the Books Editor of the Herald on Sunday where the above review was first published on 28 November, 2010.
Posted by Beattie's Book Blog at 6:44 am