Dramatic illustration is a feature of the “Pulp History” books, and includes vintage posters, left, and the work of the underground comic artist Spain Rodriguez, center, in “Devil Dog.” “Shadow Knights,” right, has illustrations by Jeffrey Smith.

The rendezvous was set for 2 p.m. sharp at Cafe Sabarsky on the teeming island metropolis of Manhattan. This Old World outpost was dark and silent as a tomb — except for the music, lively chatter and oversize windows. Near the bar sat a white-haired gentleman in black and a vivacious blonde with a slash of blood-red lipstick. On the table in front of them lay a plate of spätzle mit schwammerln and a knife that glinted like the sharpened steel of a scimitar. Actually, the only thing it was used for was butter, as the team at this cafe, the brother and sister team of David and Margaret Talbot, save the gore for print. They are the mild-mannered creators of a new book series called “Pulp History,” rip-roaring nonfiction tales with enough purple prose, gory illustrations and va-va-va-voom women to lure in even reluctant teenage male readers. 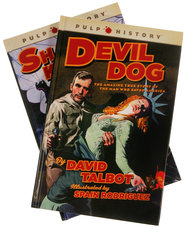 David Talbot and Margaret Talbot, the brother and sister team behind “Pulp History.”

In “Shadow Knights: The Secret War Against Hitler,” one of two books in the series that Simon & Schuster released last month, a British spy named Harry Rée wrestles with a Gestapo agent: “He gouged at one of the man’s eyes, but it wouldn’t come out. He tried to bite off his nose, but it was too tough. Then Ree shoved his forefinger into the German’s mouth, between his teeth and cheeks, and pulled up hard. The man squealed in pain and sent Ree flying over his head.”

Mr. Talbot explained: “We definitely did not want to make history like spinach, good for you but boring. We wanted to do the stuff that wasn’t good for you, with good guys, bad guys, blood, guts and sex.”

Full piece at New York Times.
Posted by Beattie's Book Blog at 7:38 am