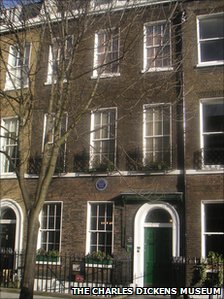 The central London house where Charles Dickens wrote The Pickwick Papers and Oliver Twist has been given a £2m grant by the Heritage Lottery Fund.
He lived in the Doughty Street property in Bloomsbury for two years before moving to a house in Regent's Park.

It was converted into a museum in 1925 and his study and the desk where he penned the novels have been preserved.
The money from the grant will be used to restore the 19th Century townhouse and double the exhibition space.
The museum - where Dickens lived from 1837 to 1839 - contains more than 10,000 books, documents and manuscripts relating to the life of the author who depicted the Victorian life and times in his novels.

Shannon Hermes, manager of the Charles Dickens Museum, said: "For us it is a very positive decision and the funds are very much needed to restore the museum and ensure it continues to stay open and houses Dickens's work."

Philip Pullman, author of the His Dark Materials trilogy, welcomed the grant.
"Everyone who visits will benefit from a closer acquaintance with this most English, but most universal, of authors.

Dickens (pic right - Getty Images) moved his family to larger quarters near Regent's Park after leaving the Bloomsbury house "It deserves the support of the nation."
More at BBC.
Posted by Beattie's Book Blog at 2:55 pm