Margaret Atwood interview: 'Go three days without water and you don't have any human rights. Why? Because you're dead'

With almost 50 books to her name, the formidably intelligent Margaret Atwood is a force to be reckoned with. But one year on from the Copenhagen Summit, not even her dark imagination could have predicted the bleak situation the world now faces. Here, she talks about cowardly politicians, her love of birds and why she's joined the Twitterati 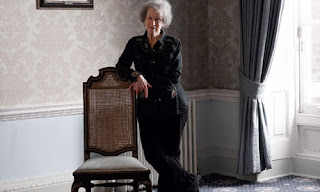 'I don't like being an icon': Margaret Atwood at the Royal Over-Seas League in London earlier this month. Photograph: Henry Bourne for the Observer


It's 25 years since the publication of The Handmaid's Tale, her dystopic masterpiece, but Margaret Atwood firmly resists the suggestion that she might be an icon of Canadian literature. "What does that mean?" she counters in her distinctive prairie monotone, somewhere between a drone and a drawl. "I don't like being an icon." A thin ironic smile. "It invites iconoclasm. Canada is a balloon-puncturing country. You are not really allowed to be an icon unless you also make an idiot of yourself."

Now no one has ever dared suggest that Margaret Atwood, a famously scary and prodigiously gifted Canadian intellectual with nearly 50 books to her name – poetry, fiction, critical essays, books for children, radio and film scripts, anthologies and collections of short stories – would ever willingly make an idiot of herself in public. But here's the big surprise: lately she's become game for a laugh. "If you want to see me make an idiot of myself in public," she goes on in that inimitably dry timbre, "you can look it up. Margaret Atwood + goalie + Rick Mercer."

It turns out Mercer is an entertainer who performed this national service when he insisted that the author of The Edible Woman, Alias Grace and The Blind Assassin (which won the Booker Prize in 2000) should get kitted up as an ice-hockey goalie for television in an item entitled "How to Stop a Puck". At first Ms Atwood demurred. No, said Mercer. You've got to be a goalie. Why, she asked. Because it will be funny, he said. Repeating this story against herself, Atwood whispers an aside: "He's from Newfoundland", as if this explains everything.

Mercer was right. It is funny. Not hilarious, but weird. And here's the kicker, which seems to give Atwood a surprising amount of satisfaction. "So I was a goalie," she concludes. "And it went viral on the internet." Cyberspace, it seems, is where she is most at home these days.

A long time ago, in fact less than a year – "but time goes all stretchy in the Twittersphere, just as it does in those folk songs in which the hero spends a night with the queen of the faeries and then returns to find that 100 years have passed and all his friends are dead" – Atwood was advised by the people who were building the website to promote her new novel, The Year of the Flood (2009), that it should include a Twitterfeed. "'A what?' I said, innocent as an egg unboiled. Should I know of Twitter? I thought it was for kiddies."

She can come across as humourless and severe, but I think her deadpan manner is just the shell with which she protects her fierce, inquisitive intelligence. "So I plunged in and set up a Twitter account." Her first problem was that there were already two Margaret Atwoods, one of them with her picture. Eventually these impostors "disappeared". She's the kind of woman who you imagine generally gets her own way like that.

Next she was told she should collect "followers". No problem. There's something contagious about Atwood's imagination: her tweets went viral, too. A few months back she had 33,500 followers. Now she has 97,500, a community of literati, techno geeks, greens, gawkers and thrill seekers, ie pretty much anyone who might pick up an Atwood novel. "There's a whole world out there of which we know nothing," she says. If ever there was an incitement to her imagination, it is the mystery of the world wide web. "You could not make it up," she concludes.
McCrum's full pice at The Observer.
Posted by Beattie's Book Blog at 11:50 am