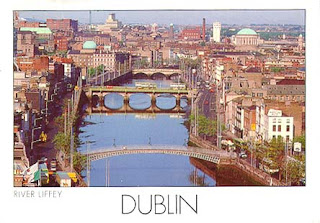 The Irish book trade has slumped in value and volume by more than 16% this year, with the next six weeks seen as critical for the health of the market in 2010.
Talks are continuing about a €90bn bailout for the beleaguered country, after years of banking crises and a total collapse of the housing market. The government is looking at a budget deficit of 32% of GDP this year.

The Irish book market is experiencing a similarly torrid time. For the year to 30th October, Nielsen BookScan figures revealed sales down by more than 16% to €103m. The History Press Ireland and New Island have shed staff to keep afloat and Merlin ceased trading, with other publishers putting their staff on shorter working weeks.

Gill & Macmillan publishing director Fergal Tobin said “some kind of flatlining is the best we can hope for in 2011”. He said the real damage has been to the midlist, which has “suffered the worst of the declines in volume and value”. He added: “The winning titles are still selling well, but there are fewer of them.”

Like most Irish publishers, Gill & Macmillan has been forced to trim its costs in the past few years and to reduce the number of titles. Given the state of the economy and the harsh budgets ahead, Tobin believes there is “no obvious cause for optimism”.

Easons’ head of buying, Maria Dickenson, said: “September and October were harder for the trade than expected despite a good range of titles. There is an air of caution about Christmas.” However, she added spring 2011 had a positive range of titles.

Hachette Ireland group sales and marketing director Jim Binchy said the publisher was “holding their own”, with its memoir by former Ireland and Leeds footballer Johnny Giles the current Irish number one. However, he added: “The next six weeks will be the real testing time . . . so much depends on the budget (set for 7th December) and how it affects people’s spending power.”


However, Penguin Ireland m.d. Michael McLoughlin said Irish sales were up on last year, thanks to Jamie’s 30-Minute Meals, The Oh My God Delusion by Ross O’Carroll Kelly, and Shane Ross and Nick Webb’s book on waste and corruption by the Irish elite, Wasters.

He said the publisher has been helped through this period as it has been a ‘very tight operation from day one.’ He said they are very fortunate not to have made any changes.
More at The Bookseller.
Posted by Beattie's Book Blog at 6:15 am

Ireland saw property values soar to ridiculous levels - one comment I saw from an American analyst (in 2005) was "Real estate in Ireland is beyond bubble, you'd have to be out of your mind to invest here". All fueled by the banks which, surprise, surprise, now have to be bailed out.