STREET FIGHT IN NAPLES - a book of art and insurrection 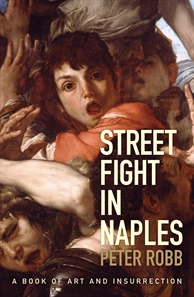 Peter Robb
Allen & Unwin - Hardback - $59.99
I reviewed this book with Kathryn Ryan on Radio New Zealand National today.
Author Peter Robb was born in Melbourne and is best-known as the author of the much-acclaimed Midnight in Sicily which is required reading for everyone who visits that Italian island.

Midnight in Sicily was published in 1996 and won the Victorian Premier's Literary Prize for non-fiction in 1997 and was also a New York Times Book Review Notable Book that year. The book was subsequently published in more than a dozen languages although it was never published in Italy as no Italian publisher would touch it because of its extensive coverage of the Mafia's operations in Sicily.

Robb came to New Zealand with his parents when he was 10 years of age and lived in Wellington for a number of years before returning to Australia. In 1978 he set off to South America but didn't get past Naples where he spent most of the next 15 years.

On returning to Australia he wrote Midnight in Sicily and then in 1998 his biography of Michelangelo Merisi da Caravaggio (1571-1610) was published simply titled M  and that went on to win the National Biography Award in 1999. I recall it created considerable controversey in the UK and US when it was published there a couple of years later.

So Street Fight in Naples completes what I guess you could call an Italian trilogy all written out of his experiences of living in Naples for 15 years.
This new book is a large handsome hardback 400 page book with a spectacular cover and it is really a history of 3000 years of aspects of Neapolitan life and art with a fairly heavy emphasis on art and also on food.

It is a very well written book as you would expect from Robb, it is not a light read though and unless you have a special interest in Naples and/or art history of the 16th and 17th centuries then it may not be for you. It certainly hasn't made me want to race off to visit Naples! It has always been and remains so today a pretty dangerous and scary place. It has a menace about it.

A positive about the book is that there is an 18 page chronology at the back   which lists the events mentioned in the book starting at 1300 BC through to 1982, as well as extensive footnotes and an index of writers and artists. There are also 16 colour plates within the book featuring notable pieces of art with notes on each piece.
Posted by Beattie's Book Blog at 12:43 pm

Interesting. We visited Naples last year, and survived. Definitely a place to visit if you want tales to tell, or if you like Barocco.