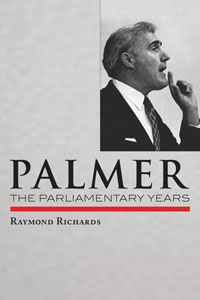 PALMER: The Parliamentary Years is the product of research by historian Dr Raymond Richards involving more than 200 linear metres of archives, as well as interviews with Sir Geoffrey Palmer, his family and associates.

Currently the President of the country’s Law Commission and New Zealand’s representative on the International Whaling Commission, Sir Geoffrey was “the key law maker in the most reforming government in New Zealand history”.
“As the Deputy Prime Minister then the Prime Minister, he managed the government’s legislative programme, initiated several major reforms, negotiated with US officials about visits by nuclear warships, and helped to keep the fourth Labour government working as its internal divisions grew,” said Dr Richards, senior lecturer in history at the University of Waikato.

The political biography reveals, from his formative years in Nelson, what shaped Sir Geoffrey, the extent of his influence, and the achievements and limitations of his parliamentary career.

Educated at Victoria University of Wellington and the University of Chicago law school, Sir Geoffrey planned to use legal means to effect social reform when he entered parliament in 1979 as a member of parliament for Christchurch Central.

Through hard work and high intelligence, Sir Geoffrey (who became Deputy Prime Minister in 1984 and held office as New Zealand’s 33rd prime minister for 13 months, 1989-1990) compiled a record of reform unmatched in this country’s history, concerning parliamentary procedures, the voting system, the environment, longstanding Māori grievances, the Bill of Rights, economic reform and many other matters, big and small.

Dr Richards said while researching and writing the book he found “the private Geoffrey Palmer a lot more relaxed than the public Geoffrey Palmer. He always looked a bit awkward in public. I also learned about the extent of the American influence on what he did. He studied at the University of Chicago law school and came back with many American ideas about constitutional issues, freedom of speech, a Bill of Rights. And I discovered the extent to which his career was a reaction to [the politics of Robert] Muldoon.”

Dr Richards said he hoped his biography would redress the fact that a lot of Sir Geoffrey’s achievements have been overlooked or are simply unknown. With much of his time at the top of the political ladder spent as deputy to David Lange, much of Palmer’s work was “behind the scenes”, Dr Richards said. “He was the glue that held everything together and his organisational and diplomatic skills were a good foil for Lange’s disordered brilliance.”

Sir Geoffrey did not read the manuscript of the book before it went to print, which Dr Richards said allowed him to write an independent account – an account that his subject said should be “warts and all”.

Dr Richards said the “warts” laid bare in the book include Sir Geoffrey’s “blind spot on compulsory unionism”, his unquestioning faith in the legal system and his leadership limitations.