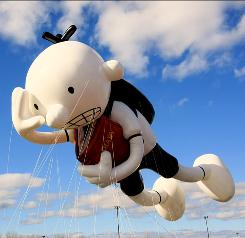 The Wimpy Kid balloon made its debut in the Macy's Thanksgiving Day Parade.

If that's not enough, Greg Heffley, the middle-schooler created by Kinney, will appear as a 60-foot-long, 56-foot-tall balloon in the Macy's Thanksgiving Day Parade in New York. Kinney says he's thrilled by the balloon but adds, "I have no place left to go — but down."
He faces new competition on next week's list from Sarah Palin, whose America by Heart hit stores Tuesday. "Palin is coming," he says, "but she doesn't have a balloon."

President Obama is no stranger to USA TODAY's list. After his 2009 inaugural, his memoir, Dreams From My Father, originally published in 1995, was No. 7; The Audacity of Hope, his 2006 book, was No. 8. Now his children's book, Of Thee I Sing: A Letter to My Daughters, illustrated by Loren Long, lands on the list at No. 14.
The 31-page book celebrates the qualities of 13 Americans, from Georgia O'Keeffe to George Washington. Obama is the first president to write a kids' book while in office.
Theodore Roosevelt co-wrote Hero Tales From American History with Henry Cabot Lodge six years before becoming president. Jimmy Carter's The Little Baby Snoogle-Fleejer, illustrated by his daughter, Amy, was released 14 years after they left the White House.
Posted by Beattie's Book Blog at 6:22 am