VS Naipaul pulls out of writers' event over Islam row 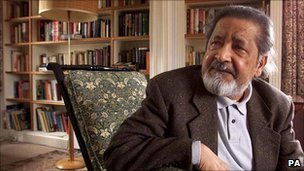 
Naipaul (right) won the Nobel Prize in Literature in 2001

Author VS Naipaul has pulled out of an international writers' conference in Istanbul over objections to his previous criticism of Islam.

The award-winning writer had been expected to attend the European Writers Parliament as a guest of honour.
But Turkish participants threatened to boycott the event saying it was an insult to Muslims if he attended.

Organisers said it was mutually agreed that he would no longer take part.
In a statement, Dunar Hızal from the Istanbul European Capital of Culture Agency said that Naipaul's invite had been "politicised" by the Turkish media.
"Therefore the ultimate goal of the event and VS Naipaul's contribution to it as an author were overshadowed.

"For this reason, as a result of compromise between the organisers of the European Writers' Parliament and VS Naipaul, the author has withdrawn his participation," he added.

In 2001, the Trinidadian writer of Indian descent caused controversy by comparing the "calamitous effect" of Islam on the world with colonialism.
He contended that Islam had both enslaved and attempted to wipe out other cultures.

Naipaul won the Nobel Prize in Literature in 2001 and received and honorary knighthood in 1989.
Istanbul has been hosting a series of events as one of the European capitals of culture.
Posted by Beattie's Book Blog at 6:25 am

The European Writer's Parliament is a prime example of why Europe is not the free West anymore, it's becoming something much more lethal (all over again).

I forgot to say on my last post that Mr Naipauls contention that, quote; " Islam had both enslaved and attempted to wipe out other cultures" ... is apparently right on the mark in respect of this very conference.

An own-goal for Islam.

Unfortunate that the opponents of free speech appear to have carried the field with so little effort--an effective 'censorship by mob.'