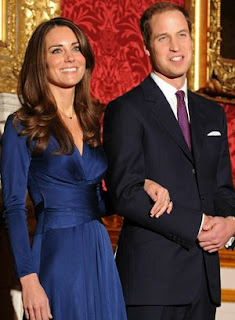 Anticipation, drama, punditry and mass hysteria – the hype around the publication of a royal wedding biography nearly matches the fervour accompanying the event itself.

Retailers are steeling themselves for a slew of books in the wake of Prince William and Kate Middleton's engagement. From Andrew Morton's as-yet unnamed book with publisher Michael O'Mara, to be released next year, to another by James Clench, a reporter on The Sun, to hit shelves on Friday, the publishing industry is hoping to capitalise upon a predicted nationwide boom in patriotic reading.

At least half-a-dozen others are believed to be in the pipeline. "I have published a lot of books of this kind and I have never lost money," said O'Mara, who commissioned the Morton book.
"Some people will just bang out anything with pictures of the bride and groom that they can make money out of. What's for sure is this is the biggest royal event since Diana's funeral. That was, again, a national holiday; very emotional. There's as much demand for commemorating happy events, of course, as sad ones."

O'Mara hopes to sell at least 100,000 copies of the Morton book, the release date of which will be announced when the wedding date is finalised. He confirmed Morton will receive a percentage of sales, though refused to specify exactly how much.
"It's a bit like making a movie," he added. "You can make a lot or you can lose your trousers." The book will be simultaneously be published in Germany, Italy, France, Spain and Portugal, along with Britain.

His confidence is matched by the nation's retailers. "Royal events always stimulate the market," Rachel Russell, business unit director for books at WH Smith told The Bookseller.
"This will bring people who don't typically buy books to the market. It's like the people who only come into bookshops at Christmas."

"It has to be good. I'm one of the few here who can remember Fergie and Andrew's wedding. We did very well out of that," added Phil Edwards, a senior buying manager at wholesaler Gardners. "Once the date is set in stone [the trade] will be able to pin promotions around it. It will be good for the export market."

While the Morton book has been written from scratch, other publishers – with an eye on the Christmas market – are rushing out updated titles that have been already published in previous guises. Kate Middleton: the Making of a Princess by Claudia Joseph, is published in paperback on Thursday but was originally released last year.

More at The Independent.
Posted by Beattie's Book Blog at 6:10 am