As we suggested was in the works in the last Publishers Lunch, late Friday afternoon HarperCollins filed suit against Gawker late Friday in the US District Court in Manhattan, claiming that the web site's publication of images of 21 pages from Sarah Palin's new 304-page book ahead of its release is copyright infringement. Federal District Court Judge Thomas Griesa convened a hearing Saturday afternoon, and issued a temporary restraining order under which Gawker was "restrained and enjoined from continuing to distribute, publish or otherwise transmit pages" of Palin's book. 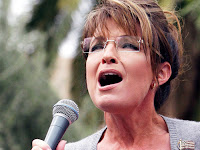 By Saturday evening the post displaying those pages from Palin's book was removed from Gawker in compliance with the judge's order. The organization has barely commented, though they updated a post called "Sarah Palin Is Mad at Us for Leaking Pages From Her Book." In that short entry Gawker had linked to a Stanford Law School web site that defines fair use. But they perhaps neglected to look more closely at that Stanford site, which includes references to the 1985 case in which was then Harper & Row prevailed over the Nation, which argued fair use when they published excerpts from former President Gerald Ford's memoirs prior to their publication. (In that case, which went all the way to the Supreme Court, the Nation only drew on up to about 400 words in quotes from the book.) In the update, Gawker simply appended the facts: "A federal judge ordered Gawker on Saturday afternoon to take down the leaked pages from Sarah Palin's book, America by Heart. The judge's order is below."

A hearing has been set for November 30. Since Palin's book will be published on Tuesday, the real question now is whether Gawker might ultimately be assessed damages. Harper indicated in a statement that before filing the suit they "sent a cease and desist letter to Gawker, which was ignored." The company says, "We believe that the reprinting of pages from Gov. Palin's book without permission constitutes a blatant infringement of copyright.... Accordingly, HarperCollins has filed a lawsuit in federal court in New York to stop the infringement and to protect our legal rights in the content of the book."
Further report in New York Times
Posted by Beattie's Book Blog at 6:42 am