How the King James Bible shaped the English language

The King James Bible turns 400 next year, and even in multicultural, secular modern Britain its influence is still profoundRobert McCrum The Observer, Sunday 21 November 2010 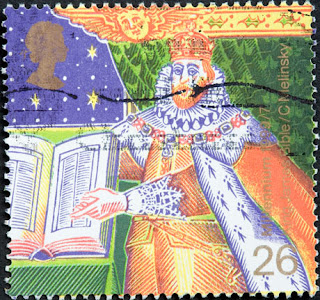 Any day now the English-speaking world will start to celebrate a number one bestseller of unprecedented literary significance. That sounds like an oxymoron, but it's actually a quatercentenary. I refer not to the collected works of William Shakespeare but a contemporary rival volume that has not only sold non-stop for 400 years but also shaped our imaginative landscape: the King James Bible.

As well as selling an estimated 1bn copies since 1611, the KJB went straight into our literary bloodstream like a lifesaving drug. Whenever we put words into someone's mouth, or see the writing on the wall, or go from strength to strength, or eat, drink and be merry, or fight the good fight, or bemoan the signs of the times, or find a fly in the ointment, or use words such as "long-suffering", "scapegoat" and "peacemaker" we are unconsciously quoting the KJB. More astounding, compared to Shakespeare's prodigal 31,000-word vocabulary, the KJB works its magic with a lexicon of just 12,000 words.

More than this enthralling matrix of linguistic influence, there's the miracle of the translation itself, a triumph of creative collaboration (54 scholars in six committees), outright plagiarism and good old English pragmatism. The Authorized Version's mission statement was a masterpiece of lowered expectations. Its aim, it declared, was not "to make a new Translation, nor yet to make of a bad one a good one, but to make a good one better, or out of many good ones, one principal good one, that hath been our endeavour".

In its own time, a further aim was not only to help unite the crowns of England and Scotland but to heal religious division and give the word of God to the common people once and for all in the vernacular, without bloodshed or uproar. With some notable contemporary dissent ("It is ill done," wrote one divine. "The edition crosseth me. I require it to be burnt") this was achieved.

In fact, the KJB became, in Adam Nicolson's resonant phrase, "a kind of national shrine, built only of words". Internationally, the expanding English-speaking world became inspired by the majesty of its most sonorous passages, the austere beauty of its prose and the endlessly quoted phrases and periods that have become braided into the texture of contemporary reference. The writers who have paid explicit tribute to the influence of the KJB include TS Eliot, Seamus Heaney, VS Naipaul, Raymond Chandler and PD James. Chandler actually said of the Bible that it was "a lesson in how not to write for the movies".
Read McCrum's full piece at The Observer.
Posted by Beattie's Book Blog at 4:43 pm

The Good Book will be further celebrated in 2011 with the release of Melvyn Bragg's definitive new history - The Book of Books; A Biography of the King James Bible 1611 - 2011 , pub Hodder and Stoughton May 2011.

For more news about the 400th anniversary of the 1611 King James Version Bible, be sure to visit the new http://www.credocommunications.net/kjv website. As was done for the Gutenberg Bible, a leather-bound leaf book is being issued.

1. The leaf book’s authors have compiled the first worldwide census of extant copies of the original first printing of the 1611 King James Version (sometimes referred to as the "He" Bible). For decades, authorities from the British Museum, et al., have estimated that “around 50 copies” of that first printing still exist. The real number is quite different.

2. As well, one of the authors has discovered the exact price at which the first KJV Bibles were sold back in 1611. That price has eluded experts for generations. The finding was quite a surprise!

For more information, you're invited to contact Donald L. Brake, Sr., PhD, at dbrake1611@q.com or David Sanford at drsanford@earthlink.net