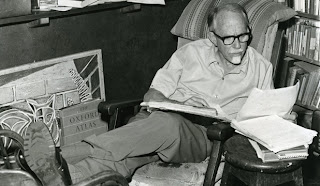 A definitive new collection of Sargeson's short stories impresses Nicholas Reid.
Frank Sargeson's collected short stories were first published in hardback in the 1960s. They were republished by Penguin, with additional stories, in 1982, the year of Sargeson's death. Now they're back in print in a third edition, which adds 13 hitherto uncollected pieces.

When I was sent this book to review, my first impulse was to do it the easy way. Like anyone who has taken a few courses in NZ Lit, I had read all Sargeson's published stories a number of times. So I was going to take the stories as read, give a quick squizz to Janet Wilson's scholarly introduction, check out the new stuff and pass a judgement.
But I decided to do it the harder way, and I conscientiously reread the lot.

The earlier, shorter, more cryptic stories, from the 1930s and 1940s, are still the ones on which Sargeson's reputation rests. Once again, I find myself admiring their style without particularly liking the stories themselves. Style isn't everything, after all. Sure, Sargeson says a lot in few words, but the tone is often sour and superior. Those simple Depression-era jokers and sheilas are ironically cut down to size. I know not to confuse Sargeson with his various first-person narrators (and if I don't know it, every academic commentator is there to tell me). But I still weary of the sardonic, laconic Kiwi tone. It's a drawn-out sneer, like meeting a string of Tui ads all saying "Yeah, right".

Much depends on Sargeson, the middle-class writer, knowing and perceiving more than the various working-class or hobo characters he invents to tell his tales. This technique is pushed as far as it can go in the longest story (really a novella), That Summer, where, by story's end, we really have to believe that the invented narrator has been extraordinarily thick, and has not seen what's under his nose. Such a relief to meet a story where the irony is more self-referential and, as a result, more self-critical, such as the masterly Gods Live in Woods.

Of course the obliqueness, the less-is-more technique, had its uses as a means of evasion. Biographical data, now well in the public domain, can let us judge how much all the mateship stuff in the earlier stories is coded gayness.

Was Sargeson essentially misogynist? Frankly, I think not as there are positive women characters in some of his stories – including the wrenchingly sad one in An Affair of the Heart. But women-as-controlling-bitches is one recurrent motif. And with this goes what more cliche-prone critics call a critique of New Zealand "puritanism". Sargeson, the little boy who wants to keep playing with his mates, squirms as his mummy makes him tidy up and put on a clean shirt.

The later, and less often anthologised, short stories from the 1950s on, have a remarkably different tone. Sargeson drops the working-class narrators and becomes more middle-class and suburban. The characters are often seedy people keeping up appearances. The author reaches back to an older narrative style, based on character quirks and eccentricities, sometimes with neat and well-made endings. Oddly, these stories seem old-fashioned even by 1950s' standards.
Full review at  stuff. co.nz