Wi Pere lived through some of the most turbulent chapters in New Zealand history. As a leader of his Rongowhakaata and Te Aitanga a Mahaki tribes, he stood resolute during the tidal wave of change that threatened the Maori way of life, and went on in 1884 to become one of the first Maori leaders in Parliament.

This handsomely produced book describes Wi Pere’s eventful life and those who influenced him. Other parts trace his whakapapa back to ancient rangatira lines, and profile the Wi Pere Trust, one of his legacies that continue to prosper and grow today.
Wiremu Pere will appeal to those who are students of Maori and political history as well as readers interested in the colourful life an this extraordinary leader.
The author Joseph Anaru Te Kani Pere, a great-grandson of Wi Pere, took over the writing of the book from earlier family members. A former teacher, he has a doctorate in English from the University of Waikato. After extensive research and writing, he has brought the work to completion with the support of the Wi Pere Trust.

The book was launched at Rongopai marae in Gisborne on Friday 19 November 2010, where the following photgraphs were taken: 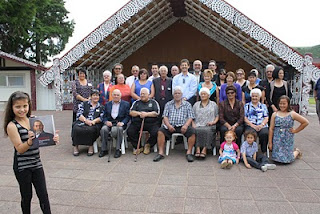 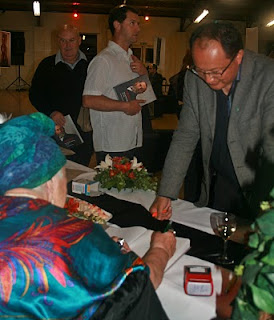 Top photo shows Wi Pere descendants in front of Rongopai marae .
Lower photo shows Rose Pere signing the book for Gisborne Mayor Meng Foon.
Review in Gisborne Herald.
And here is a pic of the handsome memorial to Wi Pere which I recall from my days growing up in Gisborne, photo by Robyn Rauna . It was unveiled by another great Maori leader, Sir James Carroll, in 1919. 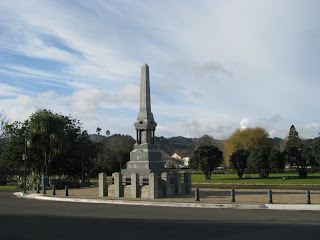