The science-fiction novelist Philip K. Dick was standing with his hands in the back pockets of his jeans, rocking on his heels, and gazing at the floor of his house. In his flannel shirt and heavy army boots, he looked, she writes in a new book about him, “graceful and attractive — like someone wearing a disguise.”

She had gone that day in 1958 to introduce herself to Dick, her neighbor, who had moved to west Marin with his second wife, Kleo. Less than a year later, he and his wife split. And Anne Rubenstein, as she was then called, a skinny blond widow, and Dick, a struggling writer, were married. Five years later, they too divorced. In the meantime they had a daughter, and Ms. Dick ran a jewelry business; Dick grew a beard and wrote some of the novels that would eventually get him hailed as a West Coast Calvino or Borges. (The Library of America began issuing his novels in 2007.) Ms. Dick, now 83, would spend the ensuing years seeking the man behind the disguise. 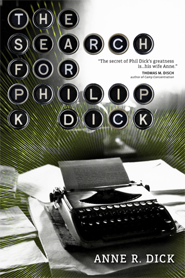 That inquiry is the subject of “The Search for Philip K. Dick,” a biography dressed like a memoir, which was published this month by the San Francisco press Tachyon.

He's one of my favourite authors from my teenage years. This looks fascinating.