Book Review: Hand Me Down World 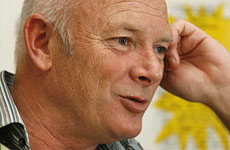 Lloyd Jones (left) is a master at manipulating character and reader alike.

It is a tricky little bugger of a book this one. Distant, confusing and perhaps a little cliched in parts, it is also compelling, subtle and maybe even brilliant.

Jones, in his follow-up novel to the acclaimed and Man Booker-shortlisted Mister Pip, tracks an unnamed heroine from the tourist resorts of Tunisia. From there she washes up, quite literally, on the shores of Sicily before making her way to Berlin, mostly on foot, in search of a stolen son.

For the first two-thirds of the book we know this woman and her odyssey only through the people she meets on the road - her hotel maid room-mate, a truck driver, a French poet, a film researcher, a blind man and his New Zealand boarder. Some come to know her well, or at least as well as she will allow. Others cross her path only fleetingly, often with unpleasant results for one or the other.

These witnesses all serve to draw an outline of this woman and her frequently grim journey, which becomes coloured in, if not necessarily less blurred when, in the final third of the novel, she tells her own story.

When Ines, as she comes to be known though it is not her name, replays events the reader thinks they are already familiar with, it becomes clear things have been twisted, glossed over and lied about as each narrator endeavours to show themselves in the best light.

It's not a new storytelling technique, using differing, ultimately self-serving narrators, but Jones employs it effectively, even masterfully, playing with readers' loyalties, expectations, prejudices and perceptions. Our heroine is at first a blank canvas for other people's guilt, greed, anger and need for control. Only now and then is she the object of their kindness or selflessness.

Full review online at NZH.
Posted by Beattie's Book Blog at 8:56 am