Obama appears to endorse some historical figures over others in his book, 'Of Thee I Sing: A Letter to My Daughters.'

By Sonja Bolle, Special to the Los Angeles Times
November 27, 2010 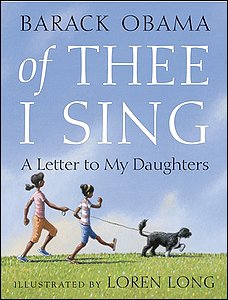 Apparently, controversy is the watchword for some children's picture books this season: At least that's the case for one book that has sparked quite a discussion in media outlets, including the decidedly un-bookish Fox News. In Barack Obama's "Of Thee I Sing: A Letter to My Daughters," the president of the United States appears to endorse some historical figures — including César Chávez, Georgia O'Keeffe and Maya Lin — over others as models for children. Isn't it great to know that the leader of the free world thinks enough of children to write seriously for them — seriously enough to be controversial? (Although, in fairness, with the state of our politics, any move he makes will be objectionable to someone.)

"Of Thee I Sing" is everything you want in a picture book: It contains ideas to talk about with kids of various ages (the book is aimed at children ages 3 and older), couched in colorful language and brought to vivid life in illustrations that tell a story of their own when carefully perused.

As if writing a letter to his children, the author asks: "Have I told you lately how wonderful you are?" He follows with a series of questions — "Have I told you that you are smart/creative/brave/strong?" — and uses the lives of famous Americans to describe each of these qualities of character: "A woman named Helen Keller fought her way through long, silent darkness. Though she could not see or hear, she taught us to look at and listen to each other."
Full report in LA Times.
Posted by Beattie's Book Blog at 7:15 am