HERO Michael Korda’s long, sometimes secondhand but finally satisfying book about T. E. Lawrence starts in a strange way. He opens “Hero” in 1917, when Lawrence, an Englishman leading an Arab guerrilla force and using military tactics that proved to have enduring impact, devises the bold strategic move of attacking the port city of Aqaba, on the Red Sea, by approaching it from an unexpected direction. In the monumental film biography of Lawrence that Mr. Korda does his best not to mention, this is the very famous “Aqaba — from the land!” moment.

The Life and Legend of Lawrence of Arabia
by Michael Korda
Illustrated. 762 pages. Harper. $36. 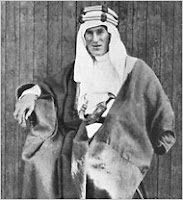 The success of this strategic Aqaba coup would establish Lawrence’s legend. It was a pivotal part of his story, and for that reason may seem like a logical starting point. But it is also an oft-described, hashed-over and heavily analyzed event in military history, to the point where Mr. Korda relies transparently and heavily on the work of Lawrence’s many other biographers. And he too often simply quotes or paraphrases Lawrence’s own classic book about his desert military experiences, “Seven Pillars of Wisdom.”

Why start “Hero” with what will turn out to be Mr. Korda’s least original contributions to a latter-day understanding of Lawrence and his reputation? Perhaps because of the title conceit. Although the sensible raison d’être for “Hero” is that there has not been a major Lawrence biography in years (there have been Lawrence-related books but no full-fledged portrait), Mr. Korda seems to want a catchier hook. So he repeatedly stamps this biography with the idea of Lawrence as a classically heroic figure.

Calling Lawrence a hero means trotting out the Joseph Campbell archetypes, bringing up Napoleon, Ajax, Ulysses and Achilles, and using the word “hero” as often as possible. It means finding heroic implications in Lawrence’s reading of William Morris’s “Sigurd the Volsung,” a “Victorian-Icelandic-Anglo-Saxon-German epic poem.” But as “Hero” later acknowledges, Lawrence was much too complicated and self-contradictory to fit any one-word label. And if he has to be given one, in light of his ambivalent yet attention-seeking attitudes about being famous, it makes almost as much sense to simply call him a star.
Full review at New York Times.
Posted by Beattie's Book Blog at 6:33 am

This book is a steal in any currency!!!!

After spending 5 years in the Western Desert in WWII, my father regaled us about the exploits of an englishman who"lived like an arab", an exotic type of man to a chap from Lancashire. I look forward to reading it - not on my Kindle.