Emma Donoghue, Paul Howard and Derek Landy also took home gongs at the awards, which were hosted to celebrate the best of Irish literature published in the last year.

Donoghue won the Hughes & Hughes Irish Novel of the Year for her Man Booker-shortlisted Room (Picador), while the Eason Irish Popular Fiction Book of the Year went to The Oh My God Delusion by Ross O'Carroll Kelly (Penguin Ireland)

Ryan Tubridy won the Irish Newcomer of the Year for JFK in Ireland: Four Days that Changed a President (Collins).

Come What May by Donal Og Cusack (Penguin Ireland) won the RTE Radio 1’s The John Murray Show Listerners’ Choice Award; Dark Times in the City by Gene Kerrigan (Vintage) won the Ireland AM Irish Crime Fiction Book of the Year; and the Argosy Irish Non-Fiction Book of the Year was A Coward If I Return A Hero If I Fall by Neil Richardson (O’Brien Press). 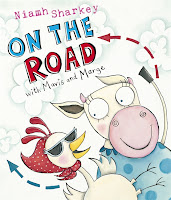 The Dublin Airport Authority Irish Children’s Book of the Year went to Niamh Sharkey in the Junior category for On the Road with Mavis and Marge (Walker), while the Senior prize went to Derek Landy’s Skulduggery Pleasant: Mortal Coil (HarperCollins Children’s Books).

Landy was also awarded the Bord Gáis Energy Irish Book of the Decade, which he won last summer, for Skulduggery Pleasant.

The winners in each category were decided upon by a combination of votes from the public and members of the Irish Literary Academy, around 100 people connected to the book trade.
Posted by Beattie's Book Blog at 7:48 am