Without libraries, we will lose a mark of our civilisation

250 libraries are earmarked to be closed, yet the government ignores this huge loss to the community 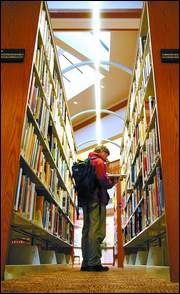 How happy does it make you when you hear your library will be closed to save money? Very happy, because iPads have made it completely redundant? Moderately satisfied, because you prefer Waterstone's and a nice cup of coffee? Or indifferent, because, let's face it, something's got to go and does anyone really still use them?
Soon, Mr Cameron's happiness project may help councils to establish whether libraries do, as philanthropists once believed, have something important to offer communities or whether, as many authorities have concluded, the contribution of this service to general well-being is so negligible as to make it a prime candidate for cuts.

Of course, for the almost 250 libraries already earmarked for closure, their role in the happiness supply chain is probably irrelevant. By the time experts have established that, where the alleviation of ignorance, illiteracy, isolation, helplessness, unemployment, infirmity, boredom, neglect and poverty are concerned, libraries do, after all, offer something culturally irreplaceable, they will be gone. It is becoming clear that Mr Cameron's government will do nothing to protect them.

Instead, in a triumph of decentralisation, the scale of library cuts will depend upon local levels of councillor-philistinism. Or local engagement. In his Hugo Young lecture last week, Nick Clegg objected to the way "opponents of localism brandish the phrase 'postcode lottery' to dramatise differences in provision between areas. But it is not a lottery when decisions about provision are made by people who can be held to democratic account. That is not a postcode lottery – it is a postcode democracy."

Thus, readers in Oxfordshire are to lose almost half their libraries next year, while Cambridgeshire cuts its service by a quarter. In Leeds, where I once spent every Saturday morning in the library, there are democratically accountable plans to axe 20 out of 53, with closures including areas with high unemployment. In North Yorkshire, the council wants to close 24. London is likely to lose one third, with Lewisham going for five out of 12, while all of Hillingdon's survive.

In Gloucestershire, where a scattered population depends heavily on small libraries, the Conservative leader, Mark Hawthorne, has constructed a model of democratic destruction. Rural taxpayers will lose all seven mobile libraries at the same time that the council, using one ruse or another, condemns a further 18 libraries out of the existing 43; this amounts to 43% cuts in libraries, against a general, council target of 28%. One compensation, the council tells residents, will be a "24/7 virtual library service" – a boon to all the regular users who, like huge numbers nationally, rely on libraries and their staff to get online.


Full story at The Observer

And another report, from The Bookseller
Posted by Beattie's Book Blog at 6:55 am