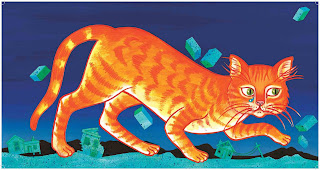 A very special book created in the aftermath of the Canterbury earthquake, with proceeds going to help the recovery of the people affected.

On a cold Christchurch morning, while the city was sleeping,
before the birds roused him with twitters and cheeping,
curled up on the end of his friend Emma’s bed,
Tiger woke with a start ... and a feeling of dread.
Tiger fled from the house with a leap and a bound
as, louder than thunder, from deep underground,
came a roar and a shudder and terrible shaking!
Around him, the city was rolling and quaking.

Quaky Cat is a picture book for children throughout New Zealand –
to bring comfort to those who experienced the earthquake, and understanding to the children who didn’t.

This is an evocative, uplifting story that will touch the hearts of all who read it. It brought tears to my eyes.
Included is a note to readers from both author and illustrator about their personal reactions to the quake.Also included are musings on the earthquake from Bob Parker, Margaret Mahy and Jason Gunn.

Royalties and additional proceeds will be donated to Christchurch charities.
The book has been produced using all Christchurch businesses.
And in a nice move a free copy will be given to all Year 1 and 2 children in
the Christchurch area, that is around 13,500 copies.

About the illustrator
Multi-awardwinning author/illustrator Gavin Bishop is arguably NZ’s best-known children’s book illustrator with a long list of fine books to his credit. Gavin has worked around the clock on the artwork, and the book is currently with the designers.

The publishers say it will be printed next week and despatched around 7/8 December.

Quaky Cat will be launched in Christchurch on 9 December. The Children’s Bookshop in Christchurch, itself badly affected by the earthquake, is involved with the launch which will be held at the Contemporary Art Gallery.
Posted by Beattie's Book Blog at 6:20 am