A Tingling Catch launched at the Basin Reserve

Cricket historian Don Neely launched the 189-page book, featuring 125 poems by 75 poets, and warmly commented on Mark’s task of selecting and compiling the book. He finished by presenting Pirie with a NZ Cricket tie in appreciation of Pirie’s work and as recognition of the book’s service to New Zealand cricket.

Pirie said in his launch speech that compiling A Tingling Catch had been ‘a labour of love over the past 4-5 years’ digging out cricket gems from newspapers, journals and poetry collections written and published in the last 150 years in New Zealand as well as researching the material at the Alexander Turnbull Library. This book combines two of his main loves: cricket and poetry.
Pirie noted there were three other anthologies of cricket poetry produced in the last 100 years, but none of these focused on a single country. It’s possible, he stated, that ‘A Tingling Catch might even be the first nationally focused anthology of cricket poetry produced.’

Pirie has started a blog for the book called “Tingling Catch” (http://tinglingcatch.blogspot.com/) for commentary on the book and new poems recently found. He hopes more readers and poets will come forward with cricket poems and submit them to him for the blog: Already there have been over a thousand page views in the past few weeks and news sites in India, Sri Lanka, the UK and America have already picked it up.

A lively poetry reading followed the speeches with Pirie playing captain in a Lord’s cap and selecting batting positions for each of the poets. Nicola Easthope and David McGill opened with Richard Langston at No. 3. Nelson Wattie who hadn’t touched a bat since primary school was in at No. 4, Tim Jones held the middle order together at No. 5 and Michael O’Leary who had MC’d the event had the all-rounder’s berth at No. 6. Harry Ricketts had his regular slot as a bowler who could bat at No. 8, while Don Neely featured at No. 9, a position he had never batted in previously. Overall, it was a good innings enjoyed by all.

The event finished in the New Zealand Cricket Museum where people were free to explore the history of the game and where the book is now available for sale. 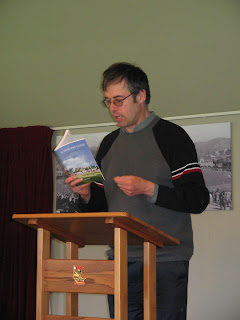 Tim Jones reading his poem, above, and below Don Neely and Mark Pirie 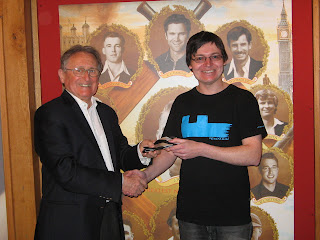 Good afternoon ladies and gentlemen and welcome to the Long Room at the Basin Reserve.
Today, even though I am in my second home, I confess to feeling like a fish out of water. For three decades I have been used to addressing audiences about cricket and introducing famous international cricket people, players, commentators, writers, officials and leading politicians from the Government, the Wellington City Council and the Diplomatic Corp.

Today I am delighted to launch Mark Pirie’s, ‘A Tingling Catch’, A Century of New Zealand Cricket Poems, 1864 – 2009, to an audience of people whose love of poetry is as great as my love of cricket.
The famous English cricket commentator, writer and poet, John Arlott, once told me that there had been more books written on cricket than any other sport. This was 20 years ago and I have no reason to suspect that this fact is still true. Included are a number of anthologies of the poetry of cricket, all of them from England. To the best of my knowledge no other test country has compiled an anthology. Hence, A Tingling Catch’ becomes an important statistic in the history of New Zealand and world Cricket.

My cricket acquaintances were firstly players.
We have all grown-up reading Wisden and have over 150 books relating to cricket on our bookshelves. We talk, observe and think on a similar wavelength.

‘A Tingling Catch’ has taken me to a new view of cricket. Poetry is about ideas from a different perspective and I felt that I needed to have a discussion with the poet who wrote the verse.

The language of the poems differed from my cricket vocabulary and I found this stimulating. Some of the poems jumped off the page and reminded me of some long-forgotten game or situation that I had encountered on the field.

The cover captures the summer game being played on a much-loved venue. ‘A Tingling Catch’, takes me back to the first time that I caught a cricket ball and the sting in my hands conveyed a skill attained to match my older brother – a badge of maturity.

Every variant of the game is captured from playing in the backyard or street, to school, club, first-class, test cricket, social cricket and pen-portraits. The historic, the self-deprecating, the tragic, the amusing, the sad – all have their rightful place in this most comprehensive anthology.

Mark is to be congratulated on the thoroughness of his research. For 5 years he has raided newspapers, libraries, magazines and books in search of gems, to produce a richly, entertaining history of verse and song about cricket spanning 146 years. We can enjoy the book today -- and for the rest of our lives.

Mark you never played cricket for New Zealand except in your dreams but rest assured that you have made a vital contribution to the history of cricket in New Zealand.
Posted by Beattie's Book Blog at 1:20 pm