Fantastica: The World of Leo Bensemann 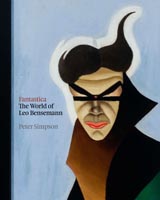 If you follow the New Zealand Art scene closely you will probably be aware of Leo Bensemann. Even if you are not fanatical about art, you are sure to have heard of his friend and colleague, Rita Angus. In Fantastica: The World of Leo Bensemann, Academic Peter Simpson explores and explains the artistic and professional life of this unique artist.

Simpson very thoroughly researches back to a few generations before Leo’s birth. We discover predominantly North German origins for the Takaka/Nelson based Bensemann family. Leo’s family and school life are typical early 20th century lives with no special privileges or even artistic influences.

Leo’s school days friendship with Lawrence Baigent becomes a lifelong one. It is known that Baigent was homosexual but it is unclear if his friendship with Leo was also sexual. Certainly Leo did marry and father 4 children. Simpson explains that Leo seemed to enjoy being an outsider or not in the mainstream. This was evidenced in his artistic work that tended towards portraits, while his contemporaries were fixated on the local landscape and then developing into landscapes when portraiture became more popular.

Bensemann was an important and long time member of the Canterbury art collective, who called themselves the Group. He exhibited with them many times during his life. He was also taken on as a partner in Christchurch’s Caxton Press, who for many years was the main publishers of New Zealand writing, especially poetry. In this capacity he also took over publishing the guide to The Group’s exhibitions. It was Bensemann’s energy that sustained Caxton and also Landfall over 4 decades of productive output.
How did the creative centre of Christchurch, of which Leo was part, lose its national prominence? Read Simpson’s book and you might discover some answers.

Reviewed by Andrew at Dymocks Booksellers Ponsonby. Ponsonby@dymocks.co.nz
Posted by Beattie's Book Blog at 11:52 am

New to me. beaut.