THE BOOKMAN IS HOOKED ON THESE NORWEGIAN CRIME NOVELS

Over the holidays I read both The Snowman and The Leopard by Norwegian writer Jo Nesbo, translated into English by Don Bartlett, both of which so impressed me that I determined to read more. 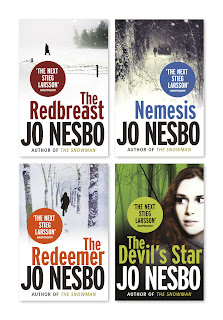 Those kind folks at Random House NZ came to the party and have provided me with four earlier titles that have been translated into English - The Redbreast, Nemesis, The Redeemer, and The Devil's Star.
I  spent the past two days and nights devouring The Redbreast and I can tell you it is every bit as good as the two read last month. Be warned that these are big books, with The Redbreast running to 640 pages while Nemesis which I will read next runs to over 700 pages.
An aspect of The Redbreast story that especially appealed to me was that it is set in two different times - 1944 on the Russian front with a group of Norwegian soldiers fighting for the Germans, and 1999-2000 in Oslo - and I learned a lot about Norwegains attitudes to Germany and Russia during World War Two. Excellent, complex plot, superb characterisation.

I read a lot of crime fiction and for my money Jo Nesbo is up there with the very best. His protagonist cop, Harry Hole (pronounced Holey), is a wonderfully drawn character whom I have got to like a lot in spite of his various flaws!
Posted by Beattie's Book Blog at 6:42 am

I haven't read any of his yet, but he's definitely on my wish list. He gets great reviews from all the crime fiction blogs

Thanks for bringing these to our attention Mr Bookman - I've been a great aficionado of crime writing ever since I read Scott Turow's Presumed Innocent (many years ago now). It's a great day indeed when one is pointed to an as yet unread, but highly recommended, author.