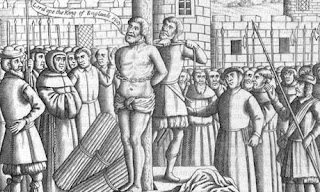 William Tyndale (1494-1536), English translator of the Bible, being tied to a stake before being strangled and burnt to death. Photograph: Hulton Archive


Jeanette Winterson
My mother taught me to read from the Book of Deuteronomy because it is full of animals – mostly unclean. So while other children had horses, bunnies, kittens and ducks, I had hoopoes, sloths, snakes, rock badgers, rams, swine and shellfish.

Mrs Winterson was in charge of language in our house. Morning and evening she made her way through all 66 books of the King James Bible – Creation to Apocalypse – took a week off for reflection, and started again. I did not find the language difficult and I was not unusual. The King James translation was written to be read out loud – and that simple overlooked fact changes every argument about "difficulty" and "comprehension". Even now, the phrasing of the King James has a naturalness to it. Awkwardness disappears within a few chapters of vocal reading – providing that you will trust yourself and trust the text. I say that because children are not brought up to read out loud any more, at home or at school. This is a new problem in the history of language development. Until mass literacy, reading aloud was essential and a pleasure.

As every poet knows, words begin in the mouth before they hit the page, and it is our experience of learning language. The King James karaoke nights, common to households where long familiarity with the stories meant that everyone joined in the refrains, built a confidence with language that the educated classes prefer to imagine as their own. My dad left school at 12, and never learned to read properly. He had no trouble with his Bible, and when he didn't understand a word or a construction, he asked Mrs Winterson or the minister. He was a man of few words himself, but he had dignity of speech, learned directly from the King James.

Scrapping the King James version, in the well-meaning way of the well-educated classes, had a number of effects, the most decisive and the most disastrous of which was to destroy for ever an ordinary, everyday connection with 400 years of the English language. In my northern mill town, many working men studied Shakespeare at the Mechanics' Institute or the Workers' Extension lectures. No one thought the language difficult because it is the language of the King James, and we had grown up with that. Shakespeare, like the Bible, was written to be heard; like Shakespeare, the Bible is theatre.

King James does not use sub-clauses or dependent clauses; it is a direct English, and one you can still hear, even now, in northern speech, the kind we celebrate in Alan Bennett. The language is grammatically uncluttered, but rich in vocabulary and image.

There is a difference between "obscure" and "difficult". I accept that, by now, the King James version seems more difficult than it is, but its rewards are greater than its difficulty.

Jeanette Winterson is a novelist.

Linton Kwesi Johnson
Given Jamaica's murder rate, one of the highest in the world, "the spiritual wickedness in high and low places" that Bob Marley opposed in song, it is hard to believe that Jamaicans are a deeply spiritual people with Christian values inculcated through the King James Bible. This book, a most effective tool of colonisation, was the only one in my illiterate grandmother's house when I was a child in Jamaica. She would have me read it to her from time to time, and I got to like the language of the Old Testament and the Psalms in particular, her favourite book. That was my first real introduction to written verse. I was seven years old and could recite some Psalms from memory, having learnt them at Sunday school in the Baptist church of which my grandmother was a member. So it's not at all surprising that my verse has some biblical references.

Jamaican popular music, from ska to dance hall, is replete with quotations from the King James Bible: "Why boasteth thyself / o evil men" (Bob Marley); "I pray thee / why do the heathen rage and the people imagine a vain thing?" (Big Youth); "Deliver me, o my God, from my enemies" (Yabby U and the Prophets) – the list is endless. The King James Bible is not just a holy book in Jamaica. It is an important aspect of the very fabric of Jamaican oral culture. Used with dexterity and wit, biblical sayings are very powerful tools in the rhetoric of everyday discourse, and a rich repository of metaphor, simile, aphorism and imagery. 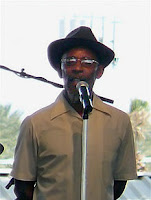