Thousands of years and millions of miles

Linda Herrick the New Zealand Herald's book editor wrote this expansive and generous review which was published in the NZH on 19 February, 2011. 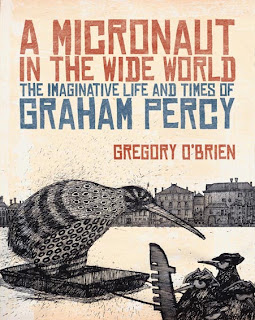 In print: A Micronaut in the Wide World: The Imaginative Life and Times of Graham Percy, by Gregory O'Brien (Auckland University Press $59.99)

What a way to go. As expat New Zealand artist Graham Percy lay dying in a London hospital in 2008, a nurse became concerned because he was frowning. She asked if he was in pain, to which the 69-year-old said, "No, no, I'm working out a drawing." As his body was shutting down, Percy's imagination was flying.


Percy's son Martin, who returned to New Zealand for the launch of Gregory O'Brien's new biography of the artist and a touring exhibition of his work, confirms the anecdote, related in the book, A Micronaut in the Wide World: The Imaginative Life and Times of Graham Percy.

"Greer Twiss [the Auckland sculptor and an old school mate of Percy's] made a very interesting observation at the opening," he says. "Even at school, Graham created the picture in his mind and then he executed it. He wasn't working it out on the paper - he worked it out mentally first, then bang!

"That's something people have commented on at the exhibition, partly because of the medium he was working in - ink on paper. If you get the line wrong, you've blown it, there's nothing you can do. So literally, his last act was to work that out and then he fell asleep."

O'Brien is doing Percy a great service in bringing his works to the attention of an audience who may never have heard of him.
His graphic designs, children's book illustrations - including The Wind in the Willows and children's books about animals by Gerald Durrell - and a pair of fine late-career books of drawings made him a highly regarded figure in Britain and the United States during his lifetime. However, Graham Percy illustrations and children's books remain hard to get hold of in the country of his birth.
O'Brien and Martin Percy hope that will change.

But who was Graham Percy? O'Brien's early chapters tell of a boy born in 1938 in Stratford, a town which boasts 67 streets named after Shakespearean characters which "would prove ... not only a delectable paradox but a creatively useful one, particularly in the last years of his life".

Percy's mother died when he was 2; his school teacher father, George, who remarried a couple of years later and moved the family to Mt Eden in Auckland, died of heart failure in 1949 at the age of 54. Graham was 11. The book includes one of Percy's moving "childhood-memory" drawings (made in 2006) given to his younger sister, Joan. It shows a boy kneeling next to "the window seat - Kakariki Ave, Mt Eden". A little girl stands to his left and the words across the top say: "Graham, reading to Joan, from the newspaper the notice of Dad's funeral - as he does so, he starts to cry."

"I wondered if that was too personal to put in the book," says O'Brien. "The originals are in the exhibition. That's not the usual territory that someone would go into and that fascinated me - that he would return to those painful moments. It was the story of his family. The loss of his parents in some ways made him incredibly sensitive and he also needed to be very resourceful.

"Out of those sort of circumstances a sort of genius developed and he was always returning to childhood."

Above - A picture of the wall in Graham Percy's Wimbledon house.