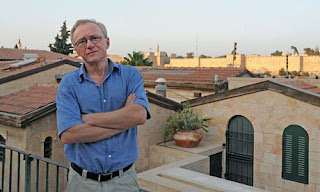 “We thought it wise in this exceptional year to publish our longlist of potential winners” says Lisa Appignanesi, chair of the judging panel, “to aid us in our deliberations and to signal the excellence of the books in play to the public”.

This year’s shortlist will be announced in March, and the overall winner will be revealed at a ceremony in London in June. The titles contending for the prize are:

 To the End of the Land by David Grossman (Jonathan Cape)

 Trials of the Diaspora by Anthony Julius (OUP)

 The Arabs and the Holocaust by Gilbert Achcar (Saqi Books)

Footnote re author photo above:
Israeli author David Grossman photographed for the Observer in Jerusalem. Photograph: Ahikam Seri/Panos Pictures
Posted by Beattie's Book Blog at 8:26 am