Playwright Michelanne Forster has been selected for The University of Auckland/Creative New Zealand residency at the Michael King Writers’ Centre from July this year.


While she holds the six-month residency, she plans to write a play set in present day New Zealand about a fiercely ambitious scientist and her family, including a son who questions the ethical basis of her research.
Michelanne Forster has written plays, radio drama, short stories, children’s books, fiction and non-fiction. She has won numerous awards and her works have been performed by theatre companies in New Zealand, Australia, Canada and the United States.
Her recent work includes Don’t Mention Casablanca, performed at the Court Theatre in Christchurch last year, Tic Tic (with Paul Barrett) in the 2010 Auckland International Comedy Festival and The Secret of Dong Ting Lake, performed at The Edge in 2010. She is currently working with composer Anthony Ritchie on a new opera entitled Te Keni, scheduled to premiere in 2012. Forster is a graduate of The University of Auckland and Auckland Secondary Teachers College. She began her career as a script editor/writer for children’s shows at Television New Zealand.
As well as her own writing, Forster teaches creative writing for The University of Auckland’s continuing education programme and is on the board of the New Zealand Writers’ Guild. While she holds the residency, she will contribute to the university’s Master of Creative Writing programme and offer a community creative writing class. 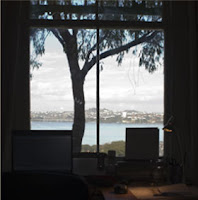 Congrats to Michelanne. Enjoy your residency and don't get lost in the view!