by David Carnoy, cnet
The number of seeders and leechers for Kindle e-books continues to rise on The Pirate Bay. 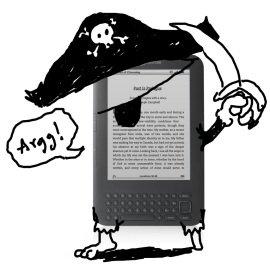 Several months ago I set up a Google alert for my book, "Knife Music," to keep abreast of anything anybody was saying--good or bad--about the thing. Over the months I've received news of the occasional blog post and tweets, but more recently I popped open an alert to learn that my book was being pirated--both as a separate file and part of two larger Torrents called 2,500 Retail Quality Ebooks (iPod, iPad, Nook, Sony Reader) and 2,500 Retail Quality Ebooks for Kindle (MOBI).

I had the strange reaction of being both dismayed and weirdly honored that someone had selected my book to strip free of its copy-protection (DRM) and include as part of a collection of "quality" e-books, many of which were from very good authors.

OK, so the use of the term "quality" was a reference to the formatting of the e-books and not the quality of the actual work, but for a moment I wasn't too bothered. After all, if someone downloads 2500 books, what are the odds he or she is going to even bother looking at yours? I was probably only losing a few bucks, especially considering my e-book is currently priced at $3.99, which only leaves me with about 50 cents a book after the publisher, e-book seller, and agent, take their cuts. Even if I missed out on selling 200 e-books, that's a mere $100. No big deal, right?

Well, obviously, for big authors, this whole pirating thing presents a bigger problem--and a bigger loss. But that isn't what dismayed me so much (sorry, but when you're a little guy, you don't care so much about how much the big guys are losing). Rather, what's shocking, and what the publishers should be most concerned about, is the fact that a library of 2,500 books can be downloaded in a matter of hours. E-books are small files and 2,500 of them can be packed into a single download (Torrent) that's only about 3.4GB. If you set the average price per book at a measly $2, the worth of said download would be $5,000. Bring it up to $4 a book and you're at $10,000. (In fact, publishers charges much more for some of these books).

By comparison, a single DVD movie is usually larger than that, as well as many retail PC games, which tend to run in the 4GB to 7.5GB range. A "major" PSP title is about 1GB, sometimes a bit larger (yes, the PSP has been severely impacted by piracy).

I probably don't need to point this out but I will. I have about 600 books in my paper book collection, which took me years to gather and prune during various moves. Digitally, that same collection could be downloaded in around 30 minutes and stored on a cheap 1GB thumb drive, which could then be copied in a matter of seconds and passed on to someone else.

A lot of people think moving away from paper is a good thing. Maybe it is. But what should also be alarming to publishers is that the number of people pirating books is growing along with the number of titles that are available for download. As I've written in the past, the rise of the iPad has spurred some of the pirating, but now the huge success of the Kindle is also leading to increased pirating. Yes some companies, such as Attributor, have done some studies about the issue, and seen increases. But for my evidence one only need glance at Pirate Bay and see what people are downloading and how many of them are doing it.

The most popular e-book download on Pirate Bay is the Kindle Books Collection, which has something like 650 e-books in it (it's just less than 1GB), and is ahead of a 224-page PDF e-book called "Advanced Sex: Explicit Positions for Explosive Lovemaking." At the time of this writing, 668 people were "seeding" the Kindle collection while 153 people were downloading it. A few month ago, the numbers of people downloading e-book collections like this at given moment were in the 50 to 60 range with fewer seeders