By Anita Singh, The Telegraph

John Le Carré has gifted his literary archive to Oxford University, including a first manuscript for Tinker Tailor Soldier Spy which reveals how different the book could have been. 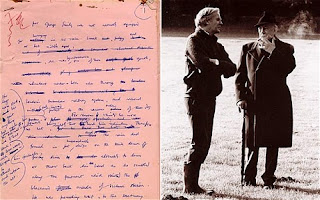 Left: One of the drafts from Tinker, Tailor, Soldier, Spy describing George Smiley. Right: John le Carré, left, with Sir Alec Guinness, who starred in Tinker, Tailor, Soldier, Spy
The novel originally had the less arresting title The Reluctant Autumn of George Smiley. It was changed close to publication in 1974 and the story became arguably le Carré's most famous work, adapted for film and the classic 1979 BBC series starring Sir Alec Guinness.


The handwritten manuscript was contained in 85 boxes of material that le Carré, 79, has given to Oxford's Bodleian Library. His archive contains the many drafts of his novels plus piles of correspondence and private photographs.

Le Carré studied at Oxford as did the fictional Smiley, and in 1995 he unmasked his Lincoln College tutor, the Rev Vivian Green, as the inspiration for the character.
"Oxford was Smiley's spiritual home, as it is mine. And while I have the greatest respect for American universities, the Bodleian is where I shall most happily rest," he said yesterday.

The Bodleian plans to make the archive available online and to use it as a valuable research resource. To mark its arrival, the library will display drafts of Tinker Tailor Soldier Spy on March 3, World Book Day.

The full story at The Telegraph.
Posted by Beattie's Book Blog at 7:28 am