From a Book Review to a Criminal Trial in France

In a little more than a week, a court in Paris will decide whether a law professor in New York committed criminal libel by publishing a book review.

No author enjoys a negative review. But most writers limit themselves to a predictable set of responses on reading a cutting evaluation of their work, usually in this order: incredulity, embarrassment, self-loathing, stewing, grumbling, anger, scheming and letter to the editor. 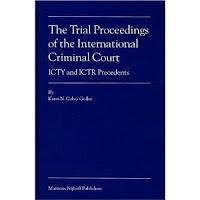 Karin N. Calvo-Goller, a senior lecturer at the Academic Center of Law and Business in Israel and the author of “The Trial Proceedings of the International Criminal Court,” was more creative. She lodged a criminal complaint in a country with almost no connection to the book or the review.

You are by now probably curious about what the review could possibly have said.
It was four paragraphs long and published in 2007 on Global Law Books, a Web site associated with The European Journal of International Law. It was sober, technical and mild. Indeed, it would not be hard to find a more caustic review on any given Sunday in this newspaper.

The reviewer, Thomas Weigend, a law professor at the University of Cologne, adopted a measured and patiently condescending tone. He said the book “meticulously covers all relevant topics,” and he praised its occasional “analytical nuggets.” But he faulted the book for “rehashing the existing legal set-up” and questioned Ms. Calvo-Goller’s “conceptual grasp” of some matters.

Ms. Calvo-Goller responded by demanding that the review be deleted.
“I am aware of the extent of freedom of expression under the First Amendment,” she wrote to the site’s editor, Joseph Weiler, a law professor at New York University. “However, the extent of that freedom ends where its exercise damages the reputation of an individual.”

Full story at New York Times.
Posted by Beattie's Book Blog at 6:44 am

Karin did not expect that Pr Weiler would put on the internet all the letters exchanged and that he would ask all for letter of indignation/support for the Court. Pr Weiler could easily imagine that this could lead to a witch hunt and insults.
He did it!

Note that Pr Weiler knew two successive deans of the Academic Center of Law and Business of Ramat Gan (who was created by Hebrew University professors). (Karin taught at the Hebrew University 15 years and there are academic relations). Let your imagination work..to understand what she felt when she saw the review and all the bad publicity made.

Pr Weiler had plenty of time (4 years) to analyse with his French Lawyer (Office of a former Mitterand’s Minister, Kiejman) the legal situation and try to contact Karin’s lawyer, Dr David Dassa Le Deist, to settle the matter and find an agreement on a comment to be placed next to Pr Weigend’s review.
He did not contact him.

NO! He even asked the Court to render a judgement on the merit even though the Court would judge that it has no jurisdiction!

Concerning the articles of the Luxembourg University Professeurs, they publish them in June of last year and it was in June that the case was to be examined by the Court but Pr. Weiler asked for a postponement.
Sure that these professors wanted to interfere with French justice. It is something that is accepted in France.
We have more freedom in France than in some countries (sub-judice...)

Any freedom has limitations. In the case of diffamation, for exemple, the limitation is made to protect the right to reputation. Every one understand that. I have never been taught by any law professor (French, American or Israeli) that seniors lecturers cannot sue professors for diffamation. I learned that we are all equal before law!
Perhaps not! (when I read what is posted on the internet).

The novelty is that Karin dared to exercise her right.You cannot imagine the number of lecturers (who sent her emails) who complained that they have been discriminated and attacked and had to shut up. Otherwise ...

If Karin was a professor and not a senior lecturer,I do not think that she would have spent time and money to seek “Justice”.

Since I am 64 years old (as Karin) and have some experience as an international lawyer and ICC international arbitrator, may I state that the same way that american law must protect americans, French law protects French citizens. And Karin is French and has a reputation to protect mainly in France.

Pr Weiler knew that Karin is French. She has published most of her books and articles in French.

He even said that she is a “friend”.

Note that the Karin’s book that was published by Kluwer-Martinus Nijhoff was not sent to Pr Weiler nor to Globallawbook.
Who knows who gave it to him and who asked him to send it, if someone asked him, to Pr Weigend, (who took more than 7 months to write 39 lines).

Perhaps this debate should not only be on what we should expect from a good book reviewer as I mentioned it before.

All the great american law professors who think that Karin is an enemy of Academic Freedom are mislead. They should think about an international convention on diffamation/libel on the Internet, instead of having each country protect their citizens (and by extension from foreign judgments on libel as far as the N.Y. State and the US are concerned).

Perhaps the world will be better off.

By the way, in addition to my Sorbonne doctorate, I graduated from NYU (MCJ — 1974). Dr Michel CALVO(Quote)