Several friends have sent me this interesting story by Ross Honeywill on the likely demise of Borders (in Australia & NZ). It is quite long but well worth the read. 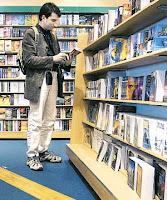 The entry into Chapter 11 bankruptcy of global book and music retail chain Borders has chilling parallels in Australia. And it all started in Melbourne.

The wave that killed the Australian business of US behemoth Borders Group Inc. took shape in the Australian summer of 2003 as new recruits stacked shelves, Blu-Tacked posters and talked about the imminent opening of the Carlton store. Borders management had high hopes for the new Lygon Street store and the recruits, still in festive mood from Christmas, had high hopes for the opening party. Less than 100 metres away on that January day, an independent bookseller was planning to kill Borders in Australia.

Mark Rubbo, owner of Readings Books and Music, knew the enemy was coming and now, while relieved that Borders had missed the Christmas boom, knew the war was there to be won. For Rubbo, peaceful co-existence was not an option. It was either kill or be killed.

Carlton, an inner-urban university suburb of Melbourne, is rich with the kind of provenance and personal stories that percolate into literature, plays and films: tales that define a culture. It was enlivened after the War by Italian immigrants in search of hope; and the Lygon Street restaurants they opened still welcome diners with plastic tablecloths and garlic-scented smiles. Peter Carey, Helen Garner, Germaine Greer, Barry Humphries, Cate Blanchett, Geoffrey Rush; endless talent punctuated by food, laughter, wine and argument.

Rubbo is an intelligent, quietly spoken man. Every time he moved the Carlton store to a larger building or opened a new store in another neighbourhood, he worried. He waited for the right moment and then, usually over a glass of wine, asked his wife Wendy if they could again mortgage the house to fund the new expansion. He worried about losing his house. And, although Borders had caused independent bookstore owners in small neighbourhoods across the world to lose their houses, it was not going to happen to Mark Rubbo, of that he was sure.

The Borders opening day generated surprisingly little fanfare: there was a sale on popular titles, of course. Big-name big-sellers discounted to less than the wholesale price Rubbo paid the publishers. It’s how they do it, big chains: they cut their prices to a loss-making level to wipe out the small, fragile independents that created the business opportunity in the first place. On the day of the Borders launch Mark Rubbo walked across Lygon Street heading for the huge, gleaming new store and stopped.

Unable to go any further, he dodged the traffic and returned to the familiar comfort of his store and asked a regular customer how she enjoyed the Peter Carey book she bought for the holidays.

A couple of weeks later Rubbo was serving a customer when a man he knew slightly slipped a crumpled note into his left hand and whispered, “this is for you” and left the store. At first opportunity Rubbo opened the note and read,
‘Livres sans Frontieres’: Books without Borders.

It took months before he could cross the street and enter the Borders store. Of course his ‘Border Patrol’ was in there every other day, reporting back on pricing and promotions. But Rubbo was more interested in his own diverse businesses than that of a monocultural predator. And what interest he did have in Borders was purely homicidal.

Mark Rubbo built Australia’s biggest independent book and music group one small step at a time by honouring the local preferences and diverse character of each new neighbourhood. By becoming part of the communities, he changed the way Melburnians bought books and simultaneously shifted the way independent booksellers around the country saw themselves and their role in local neighbourhoods. For living his passionate dream he was awarded the Order of Australia medal for ‘service to the community through fostering an awareness of Australian literature as a bookseller, literary critic, and promoter and supporter of Australian writers’ and was made a judge of the prestigious Miles Franklin Literary Award.

Books are his life. At university Rubbo worked in its bookstore part-time because his friend got him the job. He then opened a small music store, and on and on until today, forty years later, he has local stores in six different neighbourhoods. Every day he quietly suggests books to customers and ensures his employees love what they do more than the beach or a real job.

A month after Borders opened, Mark Rubbo glanced across the street and then back into the face of Peter Ellingsen from The Age newspaper. Ellingsen wanted to know how Borders had affected Readings. He was writing a feature on Readings versus Borders, and Rubbo’s response was guarded but candid. That’s how he is: careful and honest at the same time. It’s a good quality.

The air was still summery as Rubbo looked at the journalist. He had never been a comfortable public figure preferring instead, quiet conversation and the singular privacy of books. But now he was a man on a mission and discomfort had to be borne if he were to succeed. He posed uneasily for a photograph and looked down Lygon Street smelling the fresh fruit, the coffee and the intoxicating aroma of Italian meatballs and Parmigiano. “This is worth the fight,” he thought to himself, and turned to Ellingsen.

“Borders say they can grow the market, but that is just self-serving nonsense,” he tells the reporter. “They’ll take business from us and other independent stores like us.”

No public talk of murder.

In Borders South Yarra office, on the other side of town to Carlton, Sean Lenehan, with all the hubris of his global employer, called a press conference in response to Ellingsen’s story and assured the media it was coincidental they opened directly across the road from Australia’s most successful independent bookstore. Just 12 months earlier Rubbo had won the coveted Australian Independent Bookseller of the Year award, but still Borders insisted their Carlton store decision was, well...pure coincidence.

This piece of bald disingenuity did nothing but steel Rubbo’s resolve. He had built the Readings brand by attracting passionate supporters who love the act of book buying but also the fun, the atmosphere, the people he employs; and the fact that someone local actually gives a damn. He was not about to give it up.

After almost six months of trading, the Borders superstore was losing money.
Readings’ customers, that large and influential ‘market’ that attracted Borders to Carlton in the first place, simply refused to shop at the behemoth. They were catching the swell and standing up for what mattered to them, and a showdown loomed.
On 21 June Harry Potter and the Order of the Phoenix was to be launched across the globe: this single event became the defining moment in Mark Rubbo’s plan to kill Borders.
Harry Potter day for Borders was just another launch. But for Mark and Wendy Rubbo it was more personal. This was the first serious test since Borders opened and Rubbo was aware of its significance.

As expectations grew, doors opened on either side of Lygon Street. Readings’ in-store events for kids and parents came alive, and in the dizzying theatrics of the morning  Rubbo sold a staggering 400 copies before 11am: at full retail price. Over the span of the whole day, more than a thousand customers chose not to cross the street to buy precisely the same book at half-price. While denying it, this was a symbolic blow to
Borders. And they just didn’t get it. “Why would someone want to pay full price for a book we’ll sell them for half-price? We’re Borders, for God’s sake. What’s going on?”

What was going on was loyalty. Real loyalty. Loyalty does not come in the shape of a discount card or coupon. Loyalty, for the socially progressive, authenticity-loving customers of Readings and BookPeople and Waterloo Records, comes from believing in something wonderful and being thought wonderful in return.
Local support on this and every other day since meant that instead of the 30-40 per cent annual revenue slump that typically hits independents when Borders moved into town, Rubbo was suffering only a 3 per cent drop in sales at the hands of his giant neighbour. He told Wendy the house looked safe for now.

But Borders was still expanding across Australia, so Mark Rubbo had more work to do to finish them off.............

Ross Honeywill is a social scientist, doctoral candidate and internationally published author.He is research director of the Social Intelligence Lab.
Read the rest of his story about Mark Rubbo and his battle with Borders.
Posted by Beattie's Book Blog at 12:23 pm

Brilliant piece. Loyalty is undervalued in too many places.

Rubbo rubs them out - with service and integrity - great to see values in life survive both in giving and recieving.