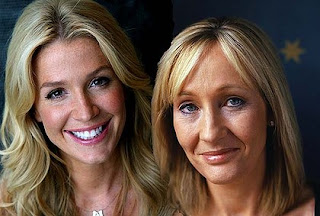 
Australian actress Poppy Montgomery is tipped to play writer JK Rowling in a film about her rise to fame and fortune.

Montgomery, who plays an FBI agent in Without A Trace, is set to star as the Harry Potter author in the unofficial biopic called Strange Magic, it was reported this week.
The made-for-television movie will be filmed in Canada with the city of Victoria doubling for Edinburgh where Rowling, who is famously protective of her private life, is based.

Speaking at the BAFTAs last week, she recalled how "wary" she was when she was first approached by a film-maker who wanted to put the adventures of the young wizard on the big screen.

Rowling, who is one of the richest women in the world, has admitted to struggling with depression in her 20s and her first novel was rejected several times.
The books have sold more than 400 million copies and been translated into 67 languages
Posted by Beattie's Book Blog at 6:39 am