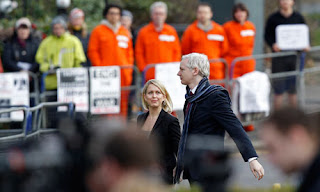 
Julian Assange is going back to Sweden:
The WikiLeaks founder lost his fight against his extradition from Britain to Sweden, where he is wanted for questioning on rape and sexual-assault charges. The judge dismissed all of Assange's lawyers arguments and said that the crime he is accused of in Sweden would also qualify as rape in Britain. Assange has seven days to appeal; if he does not, he will be sent to Sweden in 10 days.
Posted by Beattie's Book Blog at 7:21 am