A Word From Stieg Larsson’s Partner, and Would-Be Collaborator 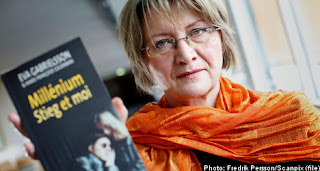 PARIS – Eva Gabrielsson, the longtime partner of the late Swedish novelist Stieg Larsson, has written her version of their life together. “Millennium, Stieg and Me” is a slim memoir published in France, Sweden and Norway last month with a co-author, the French journalist Marie-Françoise Colombani.

Ms. Gabrielsson claims that Larsson wrote slightly more than 200 pages of a sequel to his three-part “Millennium” series — “The Girl with the Dragon Tattoo,” “The Girl Who Played with Fire” and “The Girl Who Kicked the Hornet’s Nest” — shortly before his sudden death in 2004. She has been seeking the legal authority to finish it; his family has refused.

“I have no intention of recounting here the story line of volume four,” she writes, adding that finishing the book is a task that “I am capable of doing.”
She says that the texts are stored in his laptop computer, “perhaps.” She does not have the computer herself, but says that it is safely in the hands of the anti-Fascist magazine where he worked.

Ms. Gabrielsson does not claim to be Larsson’s ghostwriter for the Millennium series, which has sold more than 45 million copies worldwide, but writes that he could not have written it without her. “Out of our struggles, our commitments, our travels, our passions, our fears, these books are the jigsaw puzzle of our lives,” she writes. “That’s why I cannot pinpoint exactly what, in ‘Millennium’ comes from Stieg and what comes from me.”

At the book’s end, Ms. Gabrielsson vows to avenge those who have harmed both her and Larsson.
She has been locked in a bitter dispute with Larsson’s father and brother over the rights and income deriving from his works. She and Larsson lived together for 32 years, but because they were not married and Larsson left no will, she has no legal right to his estate.
The book will be published in the United States in June by Seven Stories Press.

And from Slate:
The Girl Who Wanted Revenge

And story last month in The Guardian.
Posted by Beattie's Book Blog at 6:14 am

It does seem wrong (on the face of it, anyway) that as his partner for so many years she is not entitled to any of his estate.