The Interpretation of Dreams 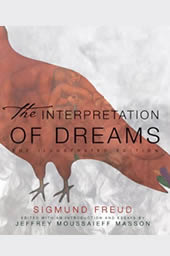 “In the following pages I shall prove that there exists a psychological technique by which dreams may be interpreted . . . .”

So starts the first sentence of Sigmund Freud’s 1900 masterwork The Interpretation of Dreams. Written near the beginning of Freud’s career and laying out, for the very first time, many of the key principles of psychoanalysis, this daring book stands as one of the few that has truly changed the world.


Initially greeted by mixed reviews, The Interpretation of Dreams ultimately proved to be incalculably influential, both within and outside the field of psychological science. As this edition amply demonstrates, Freud’s groundbreaking investigation of the unconscious had a profound and lasting impact on the visual arts—directly inspiring the Surrealist movement and continuing to motivate artists to the present day. Numerous Surrealist masterpieces, contemporary artworks, and works by “pre-Freudian” artists who anticipated Freud’s themes are beautifully reproduced in this volume.

Influential in a great number of respects, The Interpretation of Dreams has also been considered highly controversial from the moment of its publication. Freud’s ideas—central psychoanalytic tenets, such as unconscious conflict, repressed memory, the Oedipus complex, and Freud’s view of dreams as wish-fulfillments—have been dissected, argued over, and, in some cases, repudiated by many theorists.

In his introduction to this new edition, Freud scholar, former psychoanalyst, and best-selling author Jeffrey Moussaieff Masson reexamines the relevance of The Interpretation of Dreams more than a century after its initial publication. Unique to this edition is a series of cleverly “hidden” essays—tucked away inside the two-page artwork throughout the book—in which Masson explains and sometimes muses over the book’s major concepts while also scrutinizing the limitations, errors, and contradictions of Freud’s work. Several of the great psychoanalysts of the past century, such as Erik Erikson, Juliet Mitchell, and Carl Jung—some of them Freud’s champions, others his detractors—are represented here in previously published excerpts accompanying Freud’s own text.
A detailed biography of Freud’s life—interwoven between chapters and illustrated with personal snapshots, portraits, and memorabilia—rounds out the new features of this edition.

About the author:
Sigmund Freud (1856–1939) was an Austrian neurologist who founded the psychoanalytic school of psychology. He is best known for his theories of the unconscious mind and the defense mechanism of repression, and for creating the clinical practice of psychoanalysis for treating psychopathology through dialogue between a patient and a psychoanalyst.

One of the premier—if also controversial—Freud scholars of the last half-century, Jeffrey Moussaieff Masson was trained as a psychoanalyst and served as the Projects Director of the Sigmund Freud Archives, from which he was dismissed in 1981 for his unconventional conclusion regarding Freud’s seduction theory.
He is the author of books critical of Freud’s theories, as well as several other best-selling books, including When Elephants Weep. He lives with his family in New Zealand.
Posted by Beattie's Book Blog at 12:19 pm