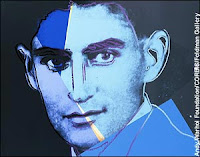 An ongoing trial in Tel Aviv is set to determine who will have stewardship of several boxes of Kafka’s original writings, including primary drafts of his published works, currently stored in Zurich and Tel Aviv.
As is well known, Kafka left his published and unpublished work to Max Brod, along with the explicit instruction that the work should be destroyed on Kafka’s death. Indeed, Kafka had apparently already burned much of the work himself. Brod refused to honour the request, although he did not publish everything that was bequeathed to him. He published the novels The Trial, The Castle and Amerika between 1925 and 1927.

In 1935, he published the collected works, but then put most of the rest away in suitcases, perhaps honouring Kafka’s wish not to have it published, but surely refusing the wish to have it destroyed. Brod’s compromise with himself turned out to be consequential, and in some ways we are now living out the consequences of the non-resolution of Kafka’s bequest.

Brod fled Europe for Palestine in 1939, and though many of the manuscripts in his custody ended up at the Bodleian Library in Oxford, he held on to a substantial number of them until his death in 1968. It was to his secretary Esther Hoffe, with whom he appears to have had an amorous relationship, that Brod bequeathed the manuscripts, and she kept most of them until her own death in 2007 at the age of 101.
For the most part Esther did as Max did, holding on to the various boxes, stashing them in vaults, but in 1988 she sold the manuscript of The Trial for $2 million, at which point it became clear that one could turn quite a profit from Kafka. What no one could have predicted, however, is that a trial would eventually take place after Esther’s death in which her daughters, Eva and Ruth, would claim that no one needs to inventory the materials and that the value of the manuscripts should be determined by their weight – quite literally, by what they weigh. As one of the attorneys representing Hoffe’s estate explained: ‘If we get an agreement, the material will be offered for sale as a single entity, in one package. It will be sold by weight … They’ll say: “There’s a kilogram of papers here, the highest bidder will be able to approach and see what’s there.” The National Library [of Israel] can get in line and make an offer, too.’

How Kafka turned into such a commodity – indeed a new gold standard – is an important question, and one to which I shall return. We are all too familiar with the way in which the value of literary and academic work is currently being established by quantitative means, but I am not sure anyone has yet proposed that we simply weigh our work on the scales. But to begin with, let us consider who the parties are to the trial and the various claims they make.

First, there is the National Library of Israel, which claims that Esther Hoffe’s will should be set aside, since Kafka does not belong to these women, but either to the ‘public good’ or else to the Jewish people, where these sometimes seem to be the same. David Blumberg, chairman of the board of directors of the National Library, puts the case this way: ‘The library does not intend to give up on cultural assets belonging to the Jewish people … Because it is not a commercial institution and the items kept there are accessible to all without cost, the library will continue its efforts to gain transfer of the manuscripts that have been found.’
It is interesting to consider how Kafka’s writings can at once constitute an ‘asset’ of the Jewish people and at the same time have nothing to do with commercial activities. Oren Weinberg, the CEO of the National Library, made a similar remark more recently: ‘The library regards with concern the new position expressed by the executors, who want to mix financial considerations into the decision as to whom the estate will be given. Revealing the treasures, which have been hidden in vaults for decades, will serve the public interest, but the position of the executors is liable to undermine that measure, for reasons that will benefit neither Israel nor the world.’

The full essay at London Review of Books.
Posted by Beattie's Book Blog at 2:34 pm