REDgroup responsible for its own demise-"a flurry of bullshit, special pleading, and knee-jerk nonsense" 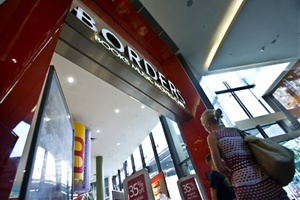 Last week's announcement that the owners of the aptly re-branded
REDgroup Retail the bookselling chains of Borders/Angus & Roberston/Whitcoulls had placed the group in administration provoked a flurry of bullshit, special pleading, and knee-jerk nonsense.

Bob Carr, a board member of Dymocks, jumped on to his failed hobby-horse called parallel importation, and whipped it into a lather. He claimed that the chain was a victim of the Labor Government's refusal to heed the advice of the Productivity Commission to allow the importation of cheap foreign books.

Carr was wrong during the debate about territorial copyright, and he's wrong now. If he'd ever stepped inside a Borders or A&R store, he might have noticed that they regularly added 10 per cent to the publisher's recommended retail prices for frontlist titles. At the very least, this doesn't sound like a retailer trying to compete with cheap foreign imports. He might also have noticed poor customer service, a lot of out-of-date stock, odd or poor selections of new titles, and a lot of non-book items where customers used to expect to find books. And did Carr ever notice that Dymocks pursued the opposite policies and, while they struggled during 2010, did much better than Borders or A&R?

The chairman of the failed group wrote to the Federal Government, claiming that their plunge into administration was due to their lack of access to parallel imports, and competition from offshore online retailers who didn't have to pay GST or duties. The PI argument is not worth thinking about, and not just for the reasons I've listed above.

Read the rest of Henry Rosenbloom's story at Canberra Times.
Posted by Beattie's Book Blog at 6:53 am

The best piece I have read yet on the demise of RED group.
And in this one of NZs darkest days what do they do? They launch a big 25% off sale.
Private equity and books was never going to work, stuff them and their deluded mindset.