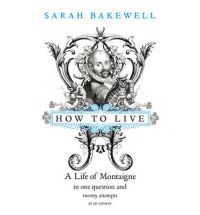 Chatto's How to Live: A Life of Montaigne has won The Duff Cooper Prize, beating Costa-category winner The Hare with Amber Eyes and Keith Richards' huge-selling autobiography, Life.

Winning author Sarah Bakewell was presented with the award by Andrew Marr at a glitzy ceremony at the French Ambassador's residence in Kensington Palace Gardens last night [23rd February].

Duff Cooper was a distinguished British diplomat and ambassador to Paris, and the prize is administered by his grand-daughter, the writer Artemis Cooper. It has been awarded annually since 1956 to the best examples of non-fiction writing published in the past year. Previous winners have included John Keegan, Anne Applebaum, Victoria Glendinning, Seamus Heaney and Lawrence Durrell.

Bakewell described winning the prize as "an incredible honour, especially given the company of such writers on the list."

Montaigne was a 16th-century French nobleman and philosopher; in her biography Bakewell takes examples of his essays on how to live everyday life and updates them for a modern audience. Chapter titles include How to Live: Read a lot, forget most of what you read, and be slow-witted, and How to live: Reflect on everything, forget nothing.

The winner receives £5,000 and, by tradition, a first edition copy of Cooper's autobiography, Old Men Forget. Last year the prize went to Robert Service for Trotsky: A Biography (Pan). The event is sponsored by champagne producer Pol Roger.

The other shortlisted titles:
Lives Like Loaded Guns: Emily Dickinson by Lyndall Gordon (Virago)
What to Look For in Winter: A Memoir in Blindness by Candia McWilliam (Jonathan Cape)
Life by Keith Richards and James Fox (Weidenfeld & Nicolson)
Bloodlands: Europe Between Hitler and Stalin by Timothy Snyder (Bodley Head)
The Hare with Amber Eyes by Edmund de Waal (Chatto)
Romantic Moderns: English Writers, Artists and the Imagination by Alexandra Harris (Thames & Hudson)
Posted by Beattie's Book Blog at 6:27 am