The Whitcoulls business was on the market for a year before going into administration. 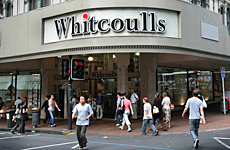 Photo / Greg Bowker.
StockTakes understands the local Whitcoulls business had been up for sale for about a year with no takers before owners REDgroup decided to put the company in administration.

Briscoe Group is understood to have taken a look but decided it wasn't keen. Voluntary administrator Steve Sherman says he has received approaches from interested parties locally and overseas although the expressions have been very cursory at this stage.

But two key market players say they can't think of anyone locally who would want to own the business.
The company has been owned by some of New Zealand's highest profile business people including Sir Ron Brierley's Brierley Investments, Graeme Hart's Rank Group and Eric Watson's Blue Star.
One source described the business as "particularly ugly".

He said the company typically made most of its money over the Christmas period and a bad Christmas could hit the company hard. Last Christmas was not great for the group.
There had been talk of REDgroup going ahead with a sharemarket float last year but that option was ditched.

Stock Takes, The Business Herald.
Posted by Beattie's Book Blog at 11:14 am