UNDER THE SUN - The Letters of Bruce Chatwin 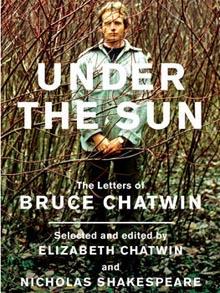 The Letters of Bruce Chatwin
By Selected and edited by Elizabeth Chatwin and Nicholas Shakespeare
Illustrated. 554 pp. Viking. $35.

“I don’t believe in coming clean,” Bruce Chatwin once told Paul Theroux, who had suggested that Chatwin’s travel writing could benefit from more detail about how he got from one place to the next. During his brief literary career, readers usually sensed that Chatwin was hiding as much about himself as he displayed. Half the story appeared to reside in the white spaces between bejewelled little sections of narrative.

The appearance of Chatwin’s letters, 22 years after his death at the age of 48, revives a curiosity never fully satisfied by biographies from Susannah Clapp in 1997 and Nicholas Shakespeare (now the letters’ principal editor) in 1999. Here, a reader thinks, is another chance to follow the far-flung tracks that Chatwin so often covered.

Throughout the letters he mailed from Kabul and Kenya and Katmandu, one can find fast, sharp renderings of misadventures and mores: “I’m afraid that most traditional Russian hospitality is a deep-seated desire to see foreigners drunk.” And yet, this great traveler was probably too much on the move to become one of the great letter-writers. The postcard may have been more his epistolary genre than the shapely missive, since the task of describing his complicated logistics sometimes overwhelmed composition. Leisurely two-sided correspondences were difficult to sustain, with Chatwin roving from one poste restante to the next.

“You’re going to brain me when you get a chance,” he wrote to me in 1985, “but I’m afraid I’m going to chuck.” In those days I taught at Vassar, and he was backing out of a writer-in-residence position we’d offered him. “I am still stranded in the blistering Australian desert” was his charming excuse; the letter actually came from Oxford. He meant, of course, that he was too caught up in trying to finish “The Songlines,” an eccentric study of aboriginal life that he ended up calling a novel. All the landscapes he trod, from West Africa to the Welsh border, got fantastically rearranged inside his head and emerged somehow more real, if less verifiable, on the page.

Full review.
Posted by Beattie's Book Blog at 8:19 am