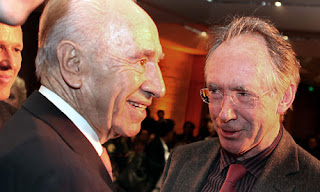 The British author Ian McEwan launched an eloquent attack on Israeli government policies in his speech accepting the Jerusalem prize for literature, saying "a great and self-evident injustice hangs in the air".

Before an audience that included Israel's president, Shimon Peres, culture minister, Limor Livnat, and Jerusalem mayor, Nir Barkat, McEwan spoke of the nihilism on both sides of the conflict.

Addressing his remarks at the opening ceremony of Jerusalem's international book fair to "Israeli and Palestinian citizens of this beautiful city", the novelist said: "Hamas has embraced the nihilism of the suicide bomber, of rockets fired blindly into towns, and the nihilism of the extinctionist policy towards Israel."

But it was also nihilism that fired a rocket at the home of the Gazan doctor, Izzeldin Abuelaish, killing three of his daughters and a niece during the Gazan war. "And it is nihilism to make a long-term prison camp of the Gaza Strip. Nihilism has unleashed a tsunami of concrete across the occupied territories."

The author referred to "continued evictions and relentless purchases of Palestinian homes in East Jerusalem, the process of the right of return granted to Jews but not to Arabs, the so-called facts on the ground of hardening concrete over the future, over future generations of Palestinian and Israeli children who will inherit the conflict and find it even more difficult to resolve than it is today."
He called for an end to settlements and encroachments on Palestinian land.

Despite his stinging criticisms, to which his audience listened in silence, McEwan said he was "deeply, deeply touched to be awarded this honour that recognises writing which promotes the idea of the freedom of the individual in society".

He said that since his decision to come to Israel to accept the prize, "my time has not exactly been peaceful" – referring to demands "with varying degrees of civility" for him to boycott the ceremony.
Jerusalem, he said, was "the most intense place I have ever set foot in".

Full report at The Guardian.
Posted by Beattie's Book Blog at 6:36 am