I was interested to read your feature on Saturday about Whitcoulls on the corner of Queen and Victoria Streets, Auckland and the involvement of two forward thinking personalities of that era, Gordon Dryden and Brian Pankhurst.

My family’s association with that corner of town goes back to 1842 as I wrote in the author blurb of my book Auckland before the Harbour Bridge (2002). My paternal great-great-grandfather, George Burton Smith, was a founder of Auckland, who arrived at Auckland as a Government officer on the barque Anna Watson on 15 September 1840. George Smith was Captain Hobson’s accountant (clerk in charge of stores) and was present at the formal ceremony naming Auckland as the capital and the raising of the British flag three days later.

Smith remained in Auckland and changed his occupation to become ‘mine host’ of the Greyhound Hotel in 1842 on the corner of Queen and Victoria Streets, now Whitcoulls Corner.

One of my prized possessions is a decanter of the 1840s from this hotel. With such heritage and bloodlines, it is hardly surprising that the decanter is still being used on a daily basis!
My great-grandmother, Ellen Smith, was born at the Greyhound Hotel in the same year.

Photos below :
(1): The Greyhound Hotel is behind the horse tram heading for the Three Lamps in the 1880s. Graham Stewart collection


(2): The Christmas of 1956 - the last of the trams – shows John Court’s ablaze with decorative Christmas trees and a small Santa compared with the giant Santa Claus that is now erected on this corner each Christmas – will big Santa return for the festive season of 2011? Graham Stewart photograph 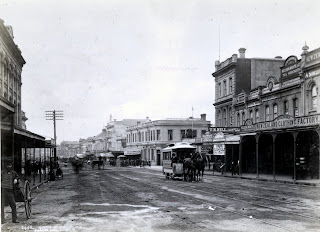 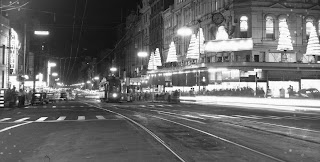