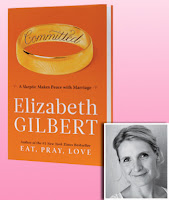 w up to her extraordinary memoir Eat, Pray Love. A worldwide bestseller, the story of her spiritual journey through Italy, India and Indonesia following the break-up of her marriage, spoke directly to a vast number of people. As Gilbert herself says in a note at the beginning of this sequel, knowing there were millions of readers out there eagerly awaiting her next book was seriously off-putting.
Aside from anything her life had become much less interesting. No longer in the grip of a spiritual crisis, she was happily settled and in love with her Brazilian older man Felipe.

Then Homeland Security intervened and unwittingly provided Gilbert with the material for another memoir-style book. Felipe was refused entry into the US and told if the couple wanted to settle there, they would have to marry. Survivors of bad divorces, the idea of legal marriage remained anathema to them both. But now they had no choice.

Committed is partly the story of how the pair drifted round the world together as they tried to deal with the uncertainty and slowness of the American Immigration process. It’s also Gilbert’s rather longwinded bid to explore and make peace with the institution of marriage.

There is loads of interesting material and intelligent thinking here, and Gilbert is as boldly open about her actions and emotions as she was in Eat Pray Love. She delves into the history of marriage, looks at how different cultures approach it and dips into a few philosophical ideas. The more personal detail comes as she examines how marriage affected the lives of her grandmother and mother, and thinks deeply about the whole issue of linking one’s happiness so wholly and definitely with that of another.
Flawed but generally likeable, Gilbert serves herself up on a plate to her readers. The trouble is Committed is dry biscuits in comparison to the rich, moist cake of Eat Pray Love. It’s simply nowhere near as enjoyable.

The sharp-eyed may pick up on the odd error – she refers to Katherine Mansfield as a novelist, for instance. But my main gripe is that by the end of the book I was heartily sick of Gilbert over-thinking the entire marital issue in a desperate bid to justify saying I do. Marry him, don’t marry him, whatever, I wanted to tell her…just stop going on about it.
Footnote:
Nicky Pellegrino, in addition to being a succcesful author of popular fiction, (her latest The Italian Wedding was published in May 2009 while her next, Recipe for Life is due from Orion in April), is also the Books Editor of the Herald on Sunday where the above review was first published on January 24. 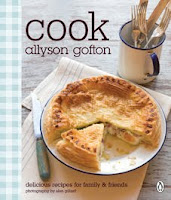 The book I love the most…..is Spice Notes by Ian Hemphill. I drop into it whenever I want to indulge my love of spices. I rummage the pages for anecdotes or culinary knowledge that helps me understand how spices are used in the many cultures of the world and how best to use them today, but most of all to read about Ian’s travel tales of exotic locations (great mishaps and all) that he has visited to find the very, very best spices. He now has his own shop in Sydney, sells great spices and still writes and take spice travel tours.

The book I’m reading now is…The English Year by Steve Roud. Not food I hear you say, no, but historical facts about the festivals and celebrations of the English year from way back when up to today. So it covers off Shrove Tuesday with its pancakes, Christmas and the foods and customs that accompany the festivities and more. A wonderful read.

The book I’d like to read next is…Napoleon’s Buttons by Penny LeCouteur and Jay Burreson. It’s about the 17 molecules that changed the world. And yes it is yet another food book – well almost. Rather than looking at the ingredients per se, the authors have looked their molecular structure, how they provided the impetus for early exploration and resulted in grand feats of engineering, medicine and law. There’s nutmeg, cloves, salt, coffee and olive oil all covered from a scientist’s angle.
Posted by Beattie's Book Blog at 10:57 am