Robert B. Parker, the Prolific Writer Who Created Spenser, Is Dead at 77
By Bruce Weber
Published New York Times: January 20, 2010

Robert B. Parker, the best-selling mystery writer who created Spenser, a tough, glib Boston private detective who was the hero of nearly 40 novels, died Monday at his home in Cambridge, Mass. He was 77. 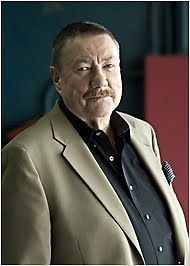 The cause was a heart attack, said his agent of 37 years, Helen Brann. She said that Mr. Parker had been thought to be in splendid health, and that he died at his desk, working on a book. He wrote five pages a day, every day but Sunday, she said.

Mr. Parker wrote more than 60 books all told, including westerns and young-adult novels, but he churned out entertaining detective stories with a remarkable alacrity that made him one of the country’s most popular writers. In recent years he had come up with two new protagonists: Jesse Stone, an alcoholic ex-ballplayer turned small-town chief of police, who was featured in nine novels written since 1997, including “Split Image,” to be published next month; and Sunny Randall, a fashion-conscious, unlucky-in-love, daughter-of-a-cop private eye created at the request of the actress Helen Hunt, who was hoping for a juicy movie role. No movie was made, but the first Sunny Randall novel, “Family Honor,” was published in 1999, and five more have followed.

It was Spenser, though — spelled “like the poet,” as the character was wont to point out (his first name was never revealed) — who was Mr. Parker’s signature creation. He appeared for the first time in 1973 in “The Godwulf Manuscript,” in which he is hired by a university to retrieve a stolen medieval document, an investigation that triggers a murder. The first pages of the book revealed much of what readers came to love about Spenser — his impatience with pomposity, his smart-alecky wit, his self-awareness and supreme self-confidence.

“Look, Dr. Forbes,” Spenser says to the long-winded college president who is hiring him. “I went to college once. I don’t wear my hat indoors. And if a clue comes along and bites me on the ankle, I grab it. I am not, however, an Oxford don. I am a private detective. Is there something you’d like me to detect, or are you just polishing up your elocution for next year’s commencement?”

A conscious throwback to hard-boiled detectives like Raymond Chandler’s Philip Marlowe, but with a sensitivity born of the age of feminism and civil rights, Spenser is a bruiser in body but a softie at heart, someone who never shies from danger or walks away from a threat to the innocent. Mr. Parker gave him many of his own traits. Spenser is an admirer of any kind of expertise. He believes in psychotherapy. He’s a great cook. He’s a boxer, a weightlifter and a jogger, a consumer of doughnuts and coffee, a privately indulgent appreciator (from a distance) of pretty women, a Red Sox fan, a dog lover. (Mr. Parker owned a series of short-haired pointers, all named Pearl, like their fictional incarnation.)

Most crucially, Spenser is faithful in love (to his longtime companion, Susan Silverman, a psychologist) and in friendship (to his frequent partner in anti-crime, a dazzlingly charming, morally idiosyncratic black man named Hawk). And usually with the two of them as seconds, he has remained indomitable, vanquishing crime bosses, drug dealers, sex fiends, cold-blooded killers, corrupt politicians and several other varieties of villain.

Mr. Parker wrote the Spenser novels in the first person, employing the blunt, masculine prose style that is often described as Hemingwayesque. But his writing also seems self-aware, even tongue-in-cheek, as though he recognized how well worn such a path was. And his dialogue was especially arch, giving Spenser an air of someone who takes very few things seriously and raises an eyebrow at everything else. Mr. Parker’s regular readers became familiar with the things that provoke Spenser’s suspicion: showy glamour, ostentatious wealth, self-aggrandizement, fern bars, fancy sports clubs and any kind of haughtiness or presumption.
Bruce Weber's full story at NYT.
Posted by Beattie's Book Blog at 6:56 am

Some time ago, I interviewed Robert and Joan for Yankee magazine. I expected — and found — wit, candor, lively minds.

I also discovered generosity: with their time (I could barely stand the idea of leaving their presence), their money (they gave in abundance to good causes) and their experience (they openly shared their feelings about rough times in their marriage).

Spenser has helped get me through my own rough times. I mourn the passing of this American original.

I am so, so sad to have lost my beloved Parker. I have been reading and loving him, Spenser and Susan and Hawk since I was 22. We have every Spenser he's written on our bookshelves, plus others. I plan to do a blog tribute. God what a sad thing.

Let me know when you have posted your tribute Maggie May and I'll put a link to it on my blog.
I share your sorrow.