Larsson under the spotlight 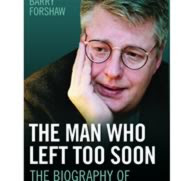 Larsson died at the age of 50 in 2004 before any of his novels were published. They have since become a sensation, selling 1.14 million copies through Nielsen BookScan in the UK.

First out in April will be a John Blake biography, The Man Who Left Too Soon by writer and reviewer Barry Forshaw (h/b, 5th, £17.99). Quercus, which publishes Larsson's novels in the UK, also has a biography coming, written by Jan Erik Petterssen. It is currently being translated from the Swedish and will appear at the end of 2010 or early 2011.

Meanwhile, Quercus imprint MacLehose Press will publish My Friend Stieg by Kurdo Baksi, again translated from Swedish, this autumn. Publicist Nicky Praca said that Baksi was a very close friend of Larsson who worked with him on setting up the anti-Nazi foundation Expo.

There is also speculation that Larsson's partner Eva Gabrielsson, who is involved in a high-profile dispute with Larsson's relatives over the proceeds from the books, is preparing her own account of her life with the writer.

Forshaw said his book will be "even-handed" in covering the dispute. "It's so incendiary. This is the first major biography so I can't take sides. But I've set out what each side says."

The Man Who Left too Soon will examine why the books became the phenomenon they now are, says Forshaw. "If Larsson were still writing, the legend wouldn't be there. His success is down to a totally original female character and the premature death of the author. It would be naive not to say that." But the book will be "by no means a hagiography", he adds. "Larsson's a wonderful storyteller who creates this new kind of heroine in Lisbeth Salander, but there are flaws in the books. And Larsson was a brave man, but also a strange mixture
Posted by Beattie's Book Blog at 6:55 am