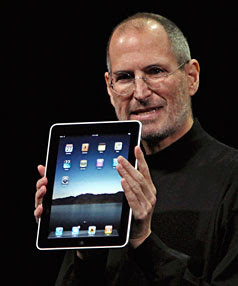 Chief executive Steve Jobs complemented the introduction of the new device with a new e-bookstore, called iBooks, together with partnerships with four major publishers, and showed off new versions of its iWork application and third-party applications.

Watch Steve on video here. - warning, you will want to own one after viewing this!

Report from PC magazine.
CNN Money
And from MSN.
Appleinsider
EETIMES.
And this just in from GalleyCat which gives a publishing perpective.

Apple has launched its much anticipated iPad tablet computer - along with an ereader application it's calling iBooks.

Initially Apple's five main partners on the iBook store are Penguin, HarperCollins, Hachette, Macmillan and S&S but the store will be opened up to other publishers today. The store works in a similar way to the iTunes music store. 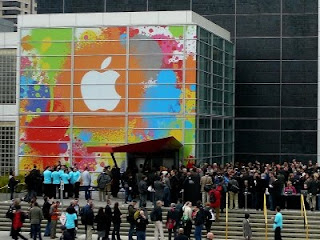 iBooks will use the ePub format and the iPad app allows all the usual ereader features as well as allowing font-changes and the ability to turn pages slowly.

US pricing will start at $499 with data plans (with AT&T) starting at $14.99 a month. The iPad will apparently be unlocked in its 3G versions which may work with UK networks when it ships in 90 days.

Posted by Beattie's Book Blog at 9:36 am

Thanks for all this Bookman. I am fascinated by this development but am a busy retailer so haven't had the time this morning to hunt around for the links. You have provided this for me, and heaps of others too no doubt in the same position, and I'm grateful. I just kept popping back to my PC whenever I had a moment. Great stuff.

oh god- another gadget i can't afford but which will become indispensable in five years. all this stuff consumes vast amounts of electicity...does it come with an auto-recharging solar panel? then i'd be intrigued...