It might seem a little, well, lazy beginning a review of books about words by quoting the book blurbs, about as indolent as citing a dictionary definition to kick off an article about a tricky subject. But blurbs are usually a publisher's ideal of how a book should be presented, even if that's not how it is actually read. 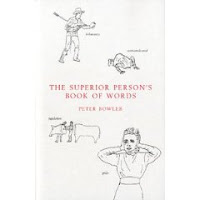 r example, Peter Bowler's latest collection of unusual words, The Completely Superior Person's Book of Words, "will unquestionably establish you as the most interesting person at any dinner party", reckons the Daily Mail. Well, maybe at a dinner party of Daily Mail readers. 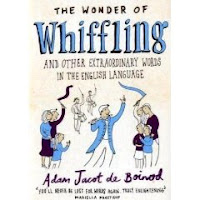 the plenty smart UK journalist Mariella Frostrup, about The Wonder of Whiffling. Though if you try to use these words in polite conversation outside a Scrabble convention, you will almost certainly be lost, socially at least.

The main reason I wrote my own word-finder book, In a Word, published last September, was because most literate people already have a wealth of words lodged in the back of their heads, but can't always recall them quickly.

was meant to dislodge a few back into readers' prose, by categorising words by use, type and sound. Good writers and speakers use what In a Word terms "fancy" words for at least three reasons: precision, invention, and plain old showing off. Because even educated, English-language natives will know so few of the words in Whiffling or Superior, the main effect is showing off, and no one likes a show-off. Or rather, no one likes a show-off whose only apparent learning is the ability to reel off obscure words.

Having said that, both Whiffling and Superior represent hours of fun to lovers of words. Not least the opportunity for pedants, probably a decent subset of the same, to pick holes.

Whiffling, by Adam Jacot de Boinod, who previously put out The Meaning of Tingo, aggregates words into rough subject categories such as emotions, drink and work. It is typical in that it contains terms allegedly of New Zealand origin, but of which you'll have never heard, unless you are a show-off whose only apparent learning is the ability to reel off obscure words.

Stickybeak is a Kiwi term dating from 1937. (A version of "Sticky Beak the Kiwi", a song popular in the 1960s according to the Ministry of Culture and Heritage, can be heard online.)


Well, maybe. But "egg-shell blonde"? Probably only in the Oxford NZ Dictionary and the novels of Ronald Hugh Morrieson, or, given the degree of trans-Tasman borrowing, the pubs of rural Queensland. Most of the NZ words cited are historical, suggesting that we, never as linguistically inventive as our Australian cousins in any era, probably had more fun with words in the time before global media.

But who could resist finding out that fevvers is a score of 33 in darts, after the 19th C cockney tongue-twister "Firty-free fevvers on a frush's froat"? Or being reminded that the word villain meant a tenant in feudal times, the notion of wickedness and worthlessness being "the effect of aristocratic pride and exclusivity"? Or, that to disemvowel is what we do to shorten text messages?

De Boinod's book is, depending on your point of view, either an amusing pop-scholarly account of the language present and historical, or one man's odd "passion for the arcane" indulged by his similarly fanatical readers. If Daily Mail readers could replicate Bowler's humour, on the other hand, they might be invited to a hundred dinner parties. Bowler alphabetises odd and erudite terms, of which there are so many out there he could carry on with this lark for decades.

But he does it with such a sense of fun. "NEOTENY n. An indefinite prolongation of the period of immaturity, with the retention of infantile or juvenile qualities into adulthood. Classic condition of the sports commentator, the lexicographer, and of course the schoolteacher." "APORIA n. Patently insincere professings, eg, by a public speaker, of an inability to know how to begin, what to say, etc. This is a very high-class word indeed, and should be used only in conversation with Samuel Beckett or Patrick White. Anyone else will assume you are referring to an unpleasant skin disease."

Julian Glover, an Australian QC, as befits his profession, is persuasive in an update of his book Wordwatching, and prescriptivists will be disappointed, as he takes a sensibly middle line on the likes of split infinitives and sentence-ending prepositions. Glover has a deep and wide knowledge of the language and its history. Ah, but there's the rub.

"The problem with developing an interest in the workings of the language is that it is hard not to notice the machinery, the stage props, the blunders and the curiosities." Thus the author wends a genial trip through the byways of English: language fossils, the wonders and limits of back-formation, the moral gradations of doublespeak, and etymological curiosities such as why the fell from one fell swoop is related to felon rather than fallen. He notes it "jars the ear" when someone speaks of octopi, since octopus comes from Greek not Latin and so should be octopedes, or rather octopuses since it "is now so thoroughly adopted into English".

I would argue more strongly for the flip side of the prescriptivist line: I have never understood why English is not more mercenary with its linguistic borrowings, denying all spelling, plurals and pronunciations but its own, as do most other languages. It simply makes the job of the learners of English, now the world's lingua franca, even harder.

Footnote:
Word man Mark Broatch wrote this most interesting piece which was first published in the Sunday Star Times 24 January, 2010 and it is reproduced her with his permission.
The Bookman warmly recommends Mark's book, In a Word.
My copy is right here on my desk and is frequently consulted.
Posted by Beattie's Book Blog at 11:15 am